In June 1962 a strange parade ambled down the cindery, zigzag track that descends into the heart of Haleakala National Park on Maui. Chaperoned by a few wildlife biologists and some pack mules, a dozen Boy Scouts navigated Sliding Sands Trail and then headed out across the heart of the volcanic crater. Each of the scouts was packing a cardboard box, and each cardboard box contained a goose.

The geese in the boxes had come all the way from England — not on their own wing power, but in the hold of an airplane. Nonetheless they were bona fide Hawaiian birds: Branta sandvicensis, or nene as they’re known in the Islands.

Even though it was summertime, chilling winds blasted Haleakala’s ten thousand-foot summit, and the young scouts of Troop 56 started out wearing snug caps and coats. But as they trekked the ten miles that it takes to cross the crater’s moonscape, the sun grew high and hot. Everyone was headed for the verdant grasslands at Paliku, the cabin farthest from the park’s summit, which catches the little rain that falls in Haleakala.

“I carried three birds,” remembers Carl Eldridge, who was 17 years old at the time. A husky football player, he hiked back and forth in the crater to assist younger scouts with their geese. “We struggled but we all helped each other. It was a fun thing for us. We got to go hiking. We knew the importance of the bird.”

When the boys finally freed their feathered cargo at Paliku, the nene waddled out of the boxes and stepped foot on Maui, home again for the first time in seventy years. 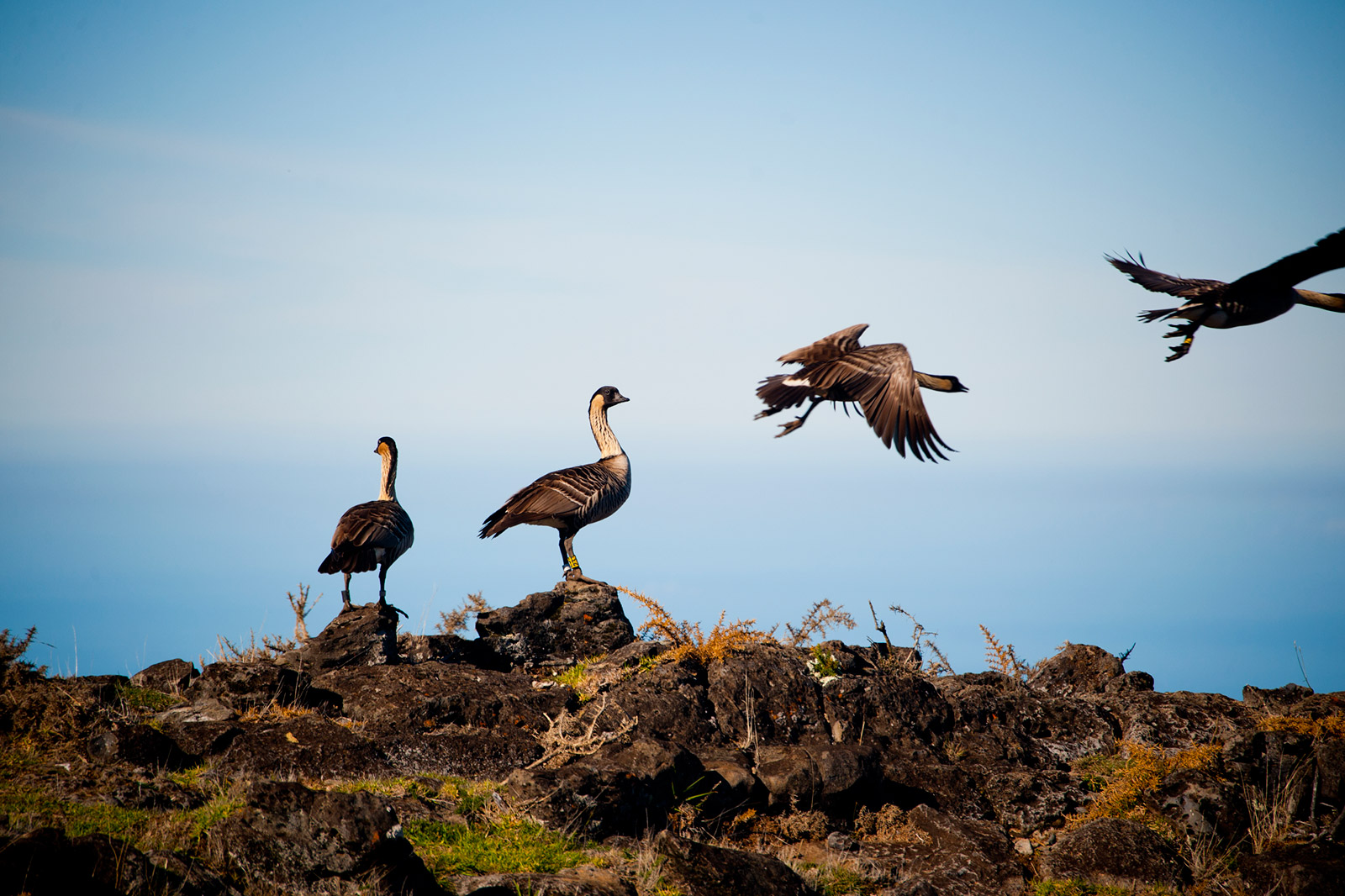 Home again: The nene flourished in Hawai‘i after their ancestors arrived on these shores half a million years ago, but when humans reached the Islands the birds’ population dropped precipitously. The nene were all but extinct when partner breeding programs in Slimbridge, England and Pohakuloa pulled them back from the brink. Today there are almost two thousand nene in Hawai‘i, with some 250 to 300 of those in Haleakala National Park.

The nene is Hawaii’s state bird and one of the rarest creatures on Earth, a tangible link to the Islands’ paradise lost. Before the arrival of humans, these islands brimmed with unique flora and fauna including singing cave crickets, mountain-roving crabs, long-legged owls and a family of unique geese, of which the nene is the lone remainder.

The geese came from the West originally: An estimated half a million years ago, around the same time that the Big Island was bubbling to the surface, a flock of Canada geese was blown off course and landed in Hawaii. Their descendants evolved into three distinct species: nene, nene nui, and the giant Hawaiian goose. The nene closely resembled their Canadian ancestors, though with a few significant differences. In response to their new environment, the birds became more terrestrial. Over time the black webbing on their feet shrank, replaced by thick pads better suited for lava plains. Their taupe wings grew shorter. Rather than flying south for winter, the nene stayed put.

When humans arrived in the Islands, things began to change for the birds. The Polynesians brought rats and dogs, which preyed on the birds, stole their eggs, and trashed their nests. Because nene evolved without mammalian predators, they made easy targets. Nene hatchlings can take three months to learn to fly, during which time the parents molt — rendering the entire family vulnerable.

Humans, too, hunted the birds for their meat, eggs, and feathers. The nene nui and the giant Hawaiian goose, both believed to have been flightless, vanished soon after the arrival of Polynesians. The smaller, more agile nene escaped its cousins’ fate though remained imperiled.

After the arrival of Westerners, many wetlands in the Islands were destroyed to make way for sugar and pineapple. The introduction of the mongoose in 1883 marked the arrival of yet another enemy of the nene. The species’ darkest hour came in 1946. By this time the nene had been wiped out on all islands but Hawaii Island. In 1946 a tsunami in Hilo swept away thirty-one nene, nearly half of the entire population. By the end of that decade, fewer than three dozen birds survived in the wild on Hawaii Island, a handful more in captivity. The nene seemed destined to follow their cousins across the dark threshold of extinction.

Miraculously, they didn’t — thanks to a few determined individuals. Halfway around the globe, British naturalist Sir Peter Scott had heard of the Hawaiian goose’s plight. Scott had a passion for studying and breeding rare waterfowl at his wetland preserve in Slimbridge, Gloucestershire, and when a colleague of his named Charles Schwartz took a job managing game birds in Hawaii, Scott urged him to look after the nene. Schwartz did: in 1949 he helped establish a breeding program at Pohakuloa on the Big Island, with a mix of wild and captive birds.

The Hawaii–England connection proved fertile. Scott sent specialists to train the new nene caretakers, and Pohakuloa returned the favor by sending Scott a breeding pair of nene. Or so they thought until both geese, upon arrival at Slimbridge, laid eggs. A gander soon followed, and by 1951 the three geese—named Kamehameha, Emma, and Kaiulani for Hawaiian alii (royalty) — were nesting. Kamehameha proved himself highly valuable by producing forty-nine descendants over seventeen years.

After ten years both the Pohakuloa and Slimbridge breeding programs were stable enough to attempt releasing nene back into the wild. Biologists chose four sites on Hawaii Island and one on Maui: Haleakala National Park, which is how, on that June morning in 1962, thirty-five British-born birds found themselves in boxes carried by Carl Eldridge and his fellow scouts. 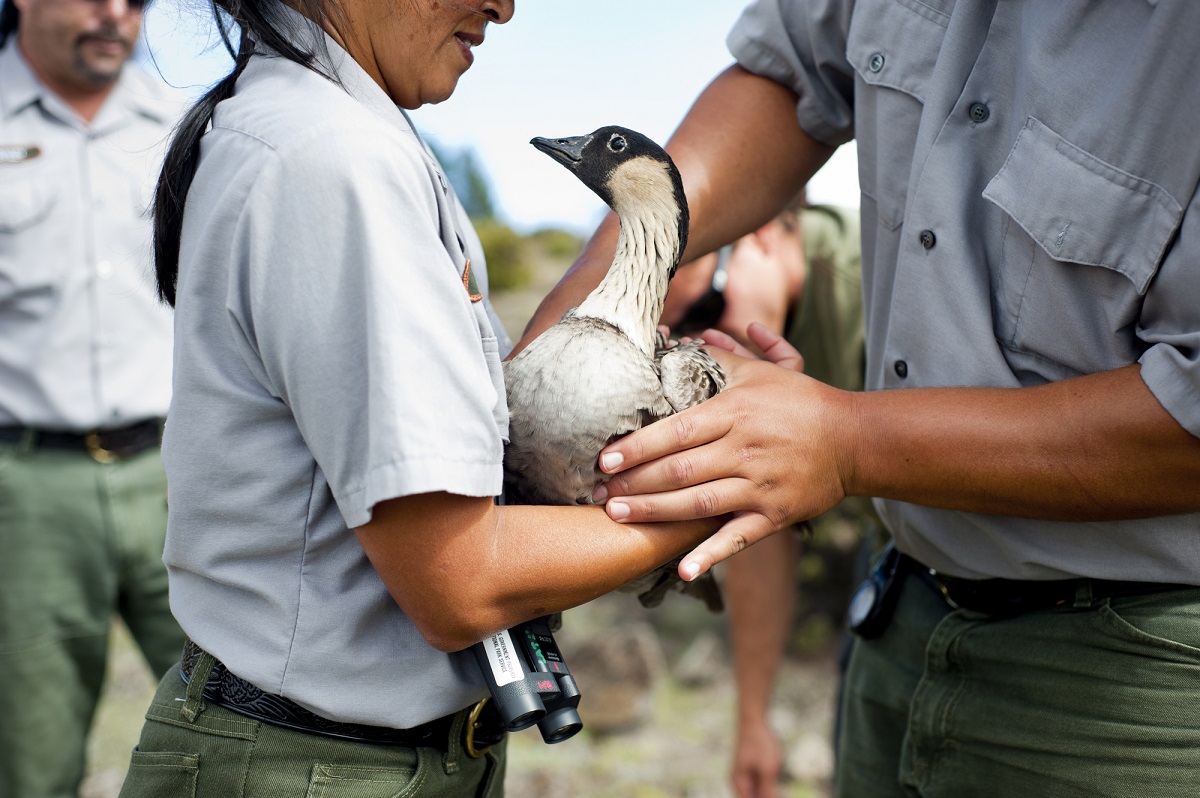 For the nene, recovering their native turf was a historic reversal of fortune. But the threats of the past hadn’t gone away. “Right off, a mongoose killed two birds,” remembers Eddie Andrade, a no-nonsense outdoorsman who was hired to shepherd Haleakala’s flock in 1968.

For thirty years Andrade supervised the release of hundreds of captive birds into the crater and guarded their wild offspring. “I used to spend more time in the crater than at home,” he says. “I would climb the highest puu [hill] and look around for nene. I’d track them miles away from Paliku.” He retired fifteen years ago, in 1997, but his voice still softens when he talks about nene goslings, as if referring to his own offspring. “The little babies have a hard time following their mother and father through the tall grass,” he says. “If they don’t keep up, they’re gone.”

Today 250 to 300 nene call Haleakala National Park home. Veteran wildlife biologist Joy Tamayose has monitored the birds’ progress for the past two decades. Tamayose can usually be found in the park’s hinterlands searching for nests or affixing bands to birds’ legs for future identification. Once she found a bird with a Slimbridge tag — which meant that its owner was a sage thirty-seven-years of age. Most nene live twenty, at most thirty years.

Tamayose says 2011 was a good year for Haleakala’s nene: Forty goslings fledged. Nesting nene tend to be secretive, tucking nests under pukiawe bushes and covering them in soft down, but once their youngsters take flight, the gregarious birds emerge from hiding and the sociable flocking season begins. From June to November a symphony of multi-tonal honks ricochets against the steep crater walls as nene families mingle and new breeding pairs form.

Nene mate for life, so it’s fitting that two of their guardians at Haleakala National Park are likewise committed. Cathleen Bailey, who supervises the park’s endangered bird operations, first visited Haleakala as an awe-struck high school volunteer. She fell first for the majestic park’s wildlife and next for its dashing aviation manager, Tim Bailey. He and Cathleen met while banding nene; she helped corral the wily birds while he tossed a throw net. When the couple wed in 2002, they tattooed a nene design on their ring fingers. 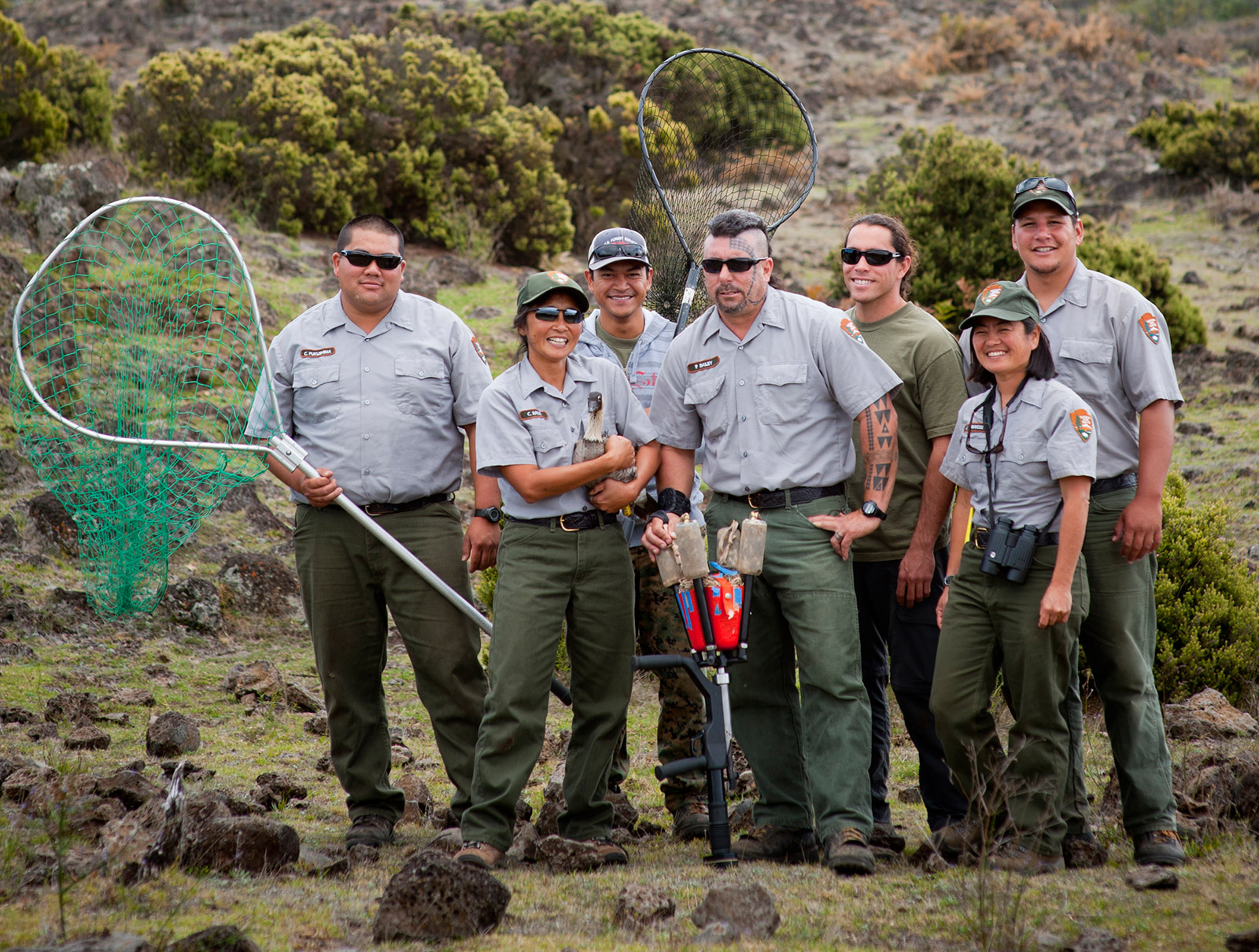 The wild bunch: Ever since the nene’s reintroduction to Haleakala fifty years ago, a small band of people have worked tirelessly to help the bird survive. Here members of the park’s Endangered Wildlife Management Team and Feral Animal Management Team stand with a just-caught young nene; that’s Cathleen Bailey holding the bird and her husband Tim (with nene tattoos) standing next to her.

Tim Bailey has spent a good chunk of his twenty-year career airborne. From above he traverses Maui’s most pristine wildernesses, descending to control predators, repair fences, and prevent fires. His dedication to natural resource management is rooted in his native Hawaiian heritage, he says: his ancestors treated plants and animals as extended family, and he does the same.

Tim notes that the nene were mentioned as a guardian species in the Kumulipo, the epic ancient creation chant that Tim calls the Hawaiian almanac. “The native birds were the smart ones. They led us to water, to food. The nene has a genetic structure to migrate, but it stays here. I too can choose to go here or there, but I remain.”

It’s now been fifty years since the nene’s return to Maui, which also marked the species’ resurgence statewide. After their successful reintroduction to Haleakala, nene were released elsewhere on Maui and other islands. At last count there were 386 nene on Maui, 480 on Hawaii, 112 on Molokai, and 1,000 on Kauai — almost 2,000 birds total. Today the charismatic bird is so commonly seen at Haleakala that park staff have difficulty convincing visitors that nene are endangered. “This is one of the best success stories,” Cathleen Bailey says. “Not just for conservation, but culturally. It’s what everybody hopes for: to have an endangered species thrive.”

Vol. 15, no. 1 This article first appeared in the February / March 2012 issue of Hana Hou! The Magazine of Hawaiian Airlines