There’s just something about watching the sunset in Waikiki with a fun, flirty cocktail. Even better if it comes with a little pink umbrella or sprig of orchid flowers.

Kitschy tiki cocktails have long been a favorite in Hawaii, with their bold flavors and garish garnishes. And there are dozens of them, with names like Haleakala Sunrise and Greg Brady’s Wipeout.

What makes these drinks so unique and special is their inventiveness, says Randy Wong, a cocktail consultant (www.randywong.net) and tiki drink aficionado. “Drinks like Trader Vic’s 1944 Mai Tai were created in subterfuge—to create exotic flavors with limited resources. Even in today’s crazy cocktail world, the combination of specific rums, lime, orgeat, and curacao is pure magic.”

While many of today’s restaurants and bars still serve the classic tiki drinks like Mai Tais and Blue Hawaiis, bartenders are modifying these recipes or coming up with entirely new Hawaii cocktails using fresh and local ingredients found in the Islands.

Here are 10 classic and not-so-classic Hawaii-inspired cocktails and where you can find them: 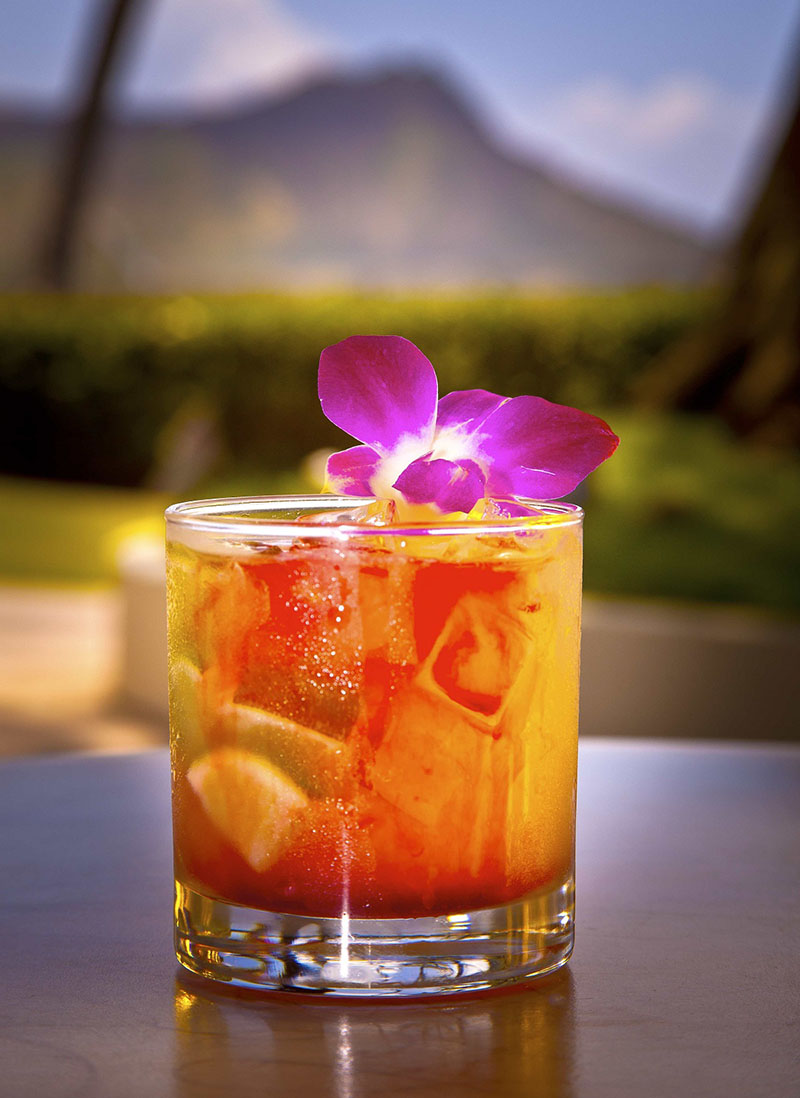 Probably the most well known of all Hawaii drinks is the Mai Tai, a combination of rum, lime, orgeat, and curacao or triple sec. It was purportedly invented in 1944 at the Trader Vic’s restaurant in Oakland, Calif. The original concoction is vastly different from the imitations served in many restaurants and bars. According to Wong, the 1944 drink, which means “good” in Tahitian, used J. Wray & Nephew Jamaican rum, fresh lime juice, orgeat (an almond syrup with French origins), orange curacao, and sugar syrup. There’s only one bottle left in the world of the Jamaican rum, so modern bartenders use various rums, preferably ones made from fermented sugar cane juice, instead. The Royal Kona Resort hosts the Don the Beachcomber Mai Tai Festival, which lures about two dozen mixologists who blend their best recipes in the hopes of winning $10,000. WHERE: You can find Mai Tais on just about any menu in Waikiki. But the most recent winner of the Kona competition was Wendy Augustine, a bartender at the Haliimaile General Store on Maui. The Halekulani in Waikiki also boasts a popular Mai Tai, perfect for sipping at its oceanfront restaurant, House Without a Key. 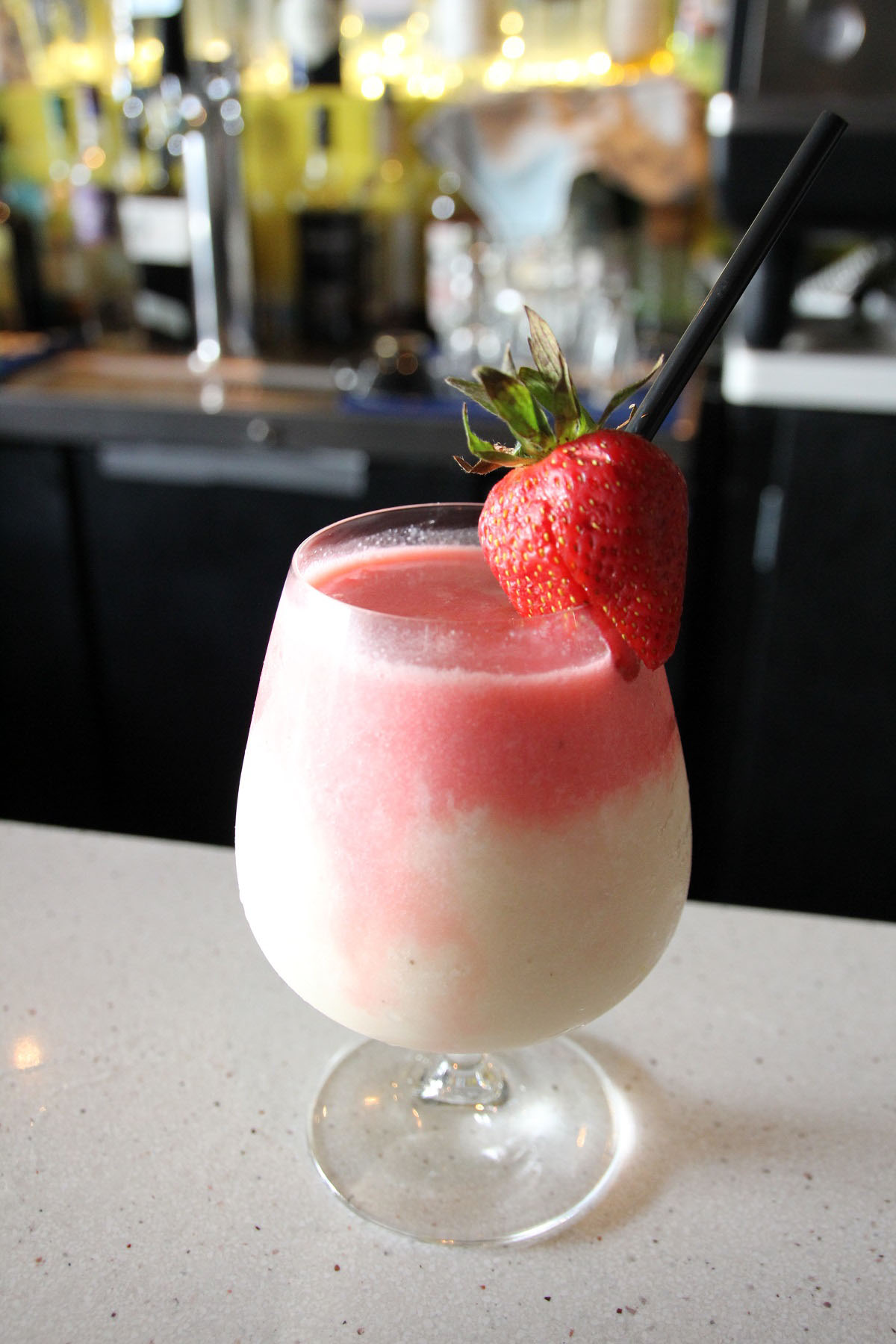 “The Lava Flow is essentially a frozen strawberry daiquiri poured into a pina colada,” Wong says. Neither drink has roots in the Islands. The pina colada started at the Caribe Hilton in Puerto Rico in 1959 with just white rum and fresh pineapple juice poured over crushed ice. Later, the coconut cream was added and the popular blended drink was born. WHERE: The Royal Hawaiian Hotel’s Mai Tai Bar offers a version of this drink using muddled fresh strawberries and banana with coconut cream and freshly squeezed pineapple juice, then fortified with Mount Gay rum. 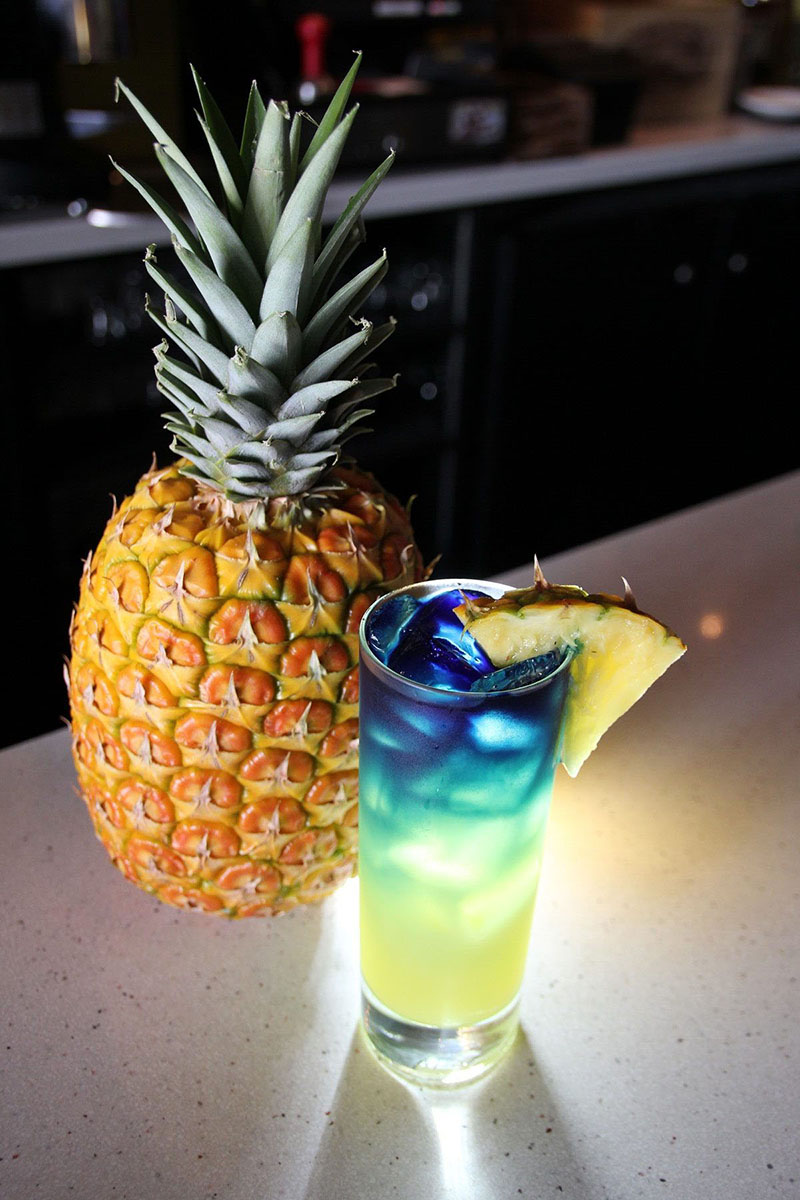 This drink, named after the popular CBS show in the late-1960s starring Jack Lord, is a twist on the Blue Hawaii, skipping on the vodka and poured over ice into a highball glass. WHERE: Since the Hilton Hawaiian Village served as the hotel partner to the new incarnation of the CBS hit drama, Tropics Bar & Grill serves its version using Absolut Raspberry vodka with Blos Blue Curacao, sweet and sour, and strawberry puree. 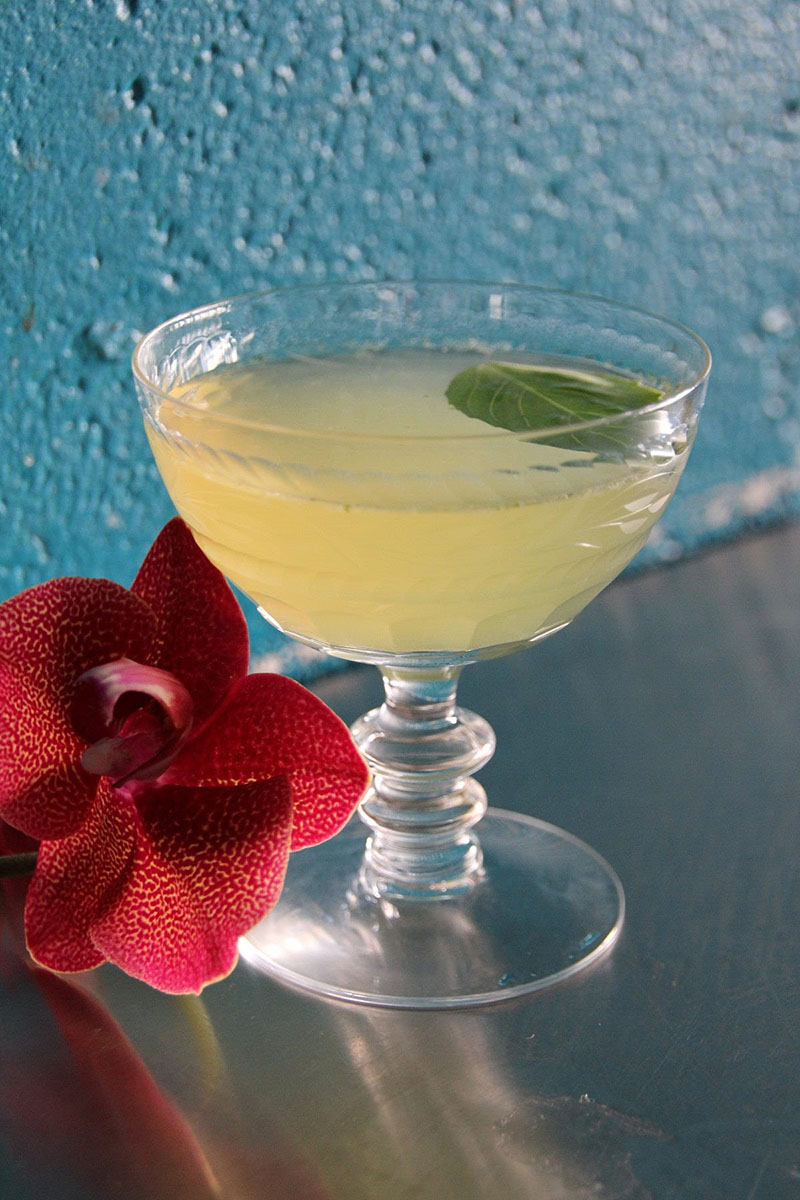 Bartender Jordan Edwards from SALT Honolulu came up with this drink three years ago after tasting homemade Hawaiian chili pepper water for the first time. “I never liked spicy food, but the chiles were great because the spice never lingered and just added good flavor,” he says. He started playing with some fresh basil he had growing outside and, after a few experiments, added local honey to slightly cut the heat. “The name is obviously a play on words,” he says. “I figured it’s a spicy drink so it’s basically warning people to be careful about the spice while referencing where the drink ingredients came from.” WHERE: SALT Honolulu in Kaimuki 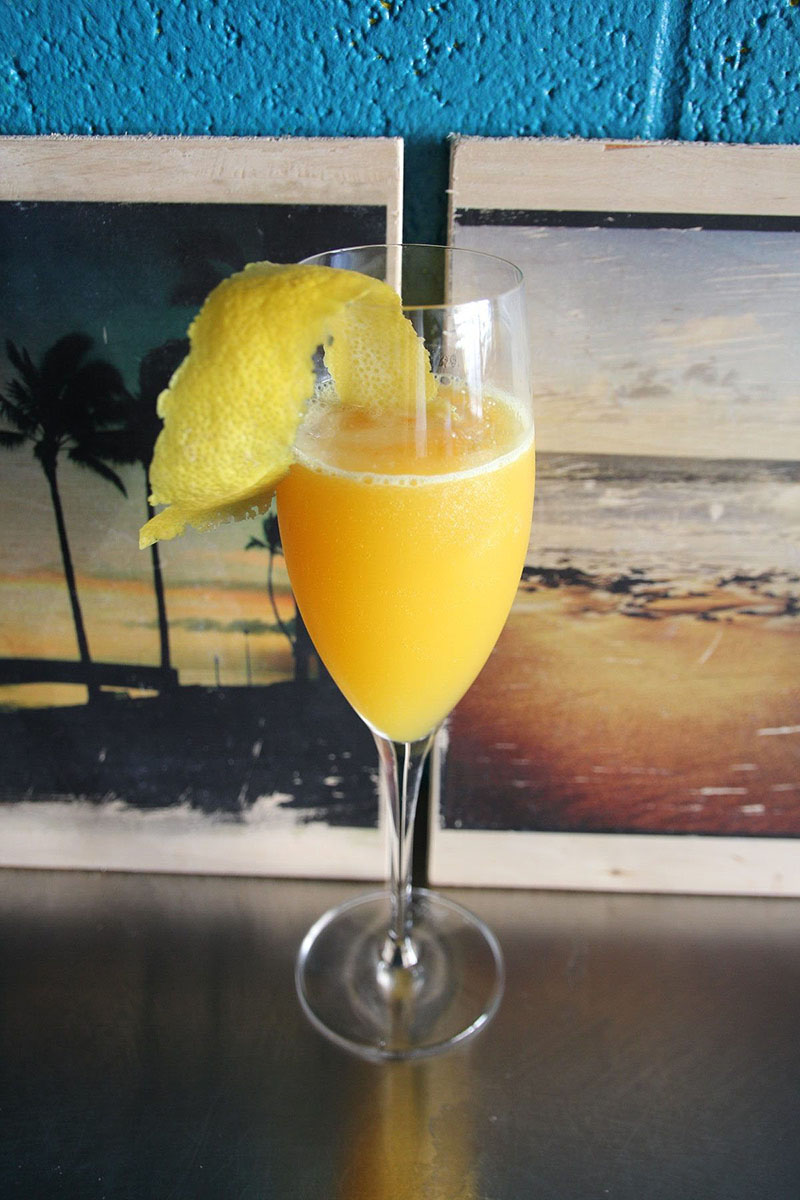 This sparkling drink was created a couple of years ago for Valentine’s Day by Edwards. It was so popular, people kept coming back to the bar, asking for the drink. “It’s refreshing, tropical and light,” he says, “so I can see why people like it.” It calls for fresh lilikoi, or passionfruit, juice, which adds a unique tartness. WHERE: SALT Honolulu in Kaimuki 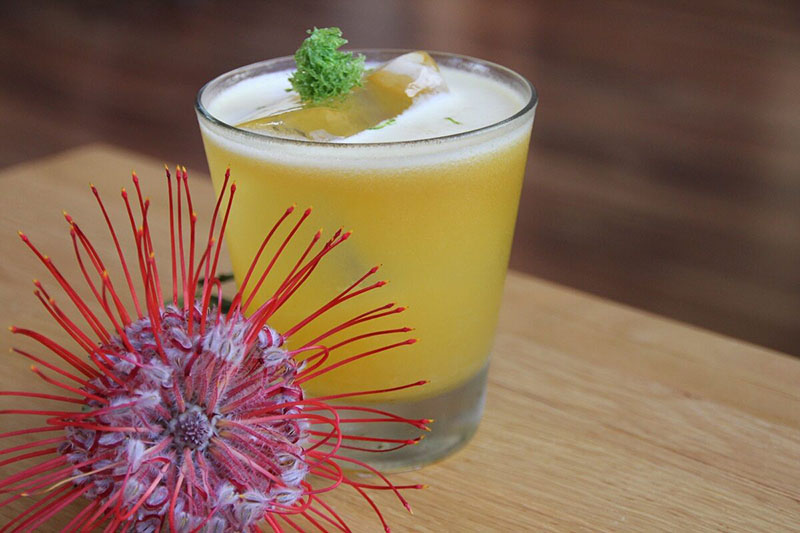 This is 12th Avenue Grill bartender Mike Hall’s version of the Mai Tai. The tropical influence comes from the coconut water, which owner Denise Luke says offers a much cleaner flavor and lighter body, and lilikoi puree. Hall prefers sugar cane rums for this drink, which boast truer flavors and character than rums made from molasses. “The lime zest on top is supposed to resemble a small deserted island,” he adds. WHERE: 12th Avenue Grill in Kaimuki 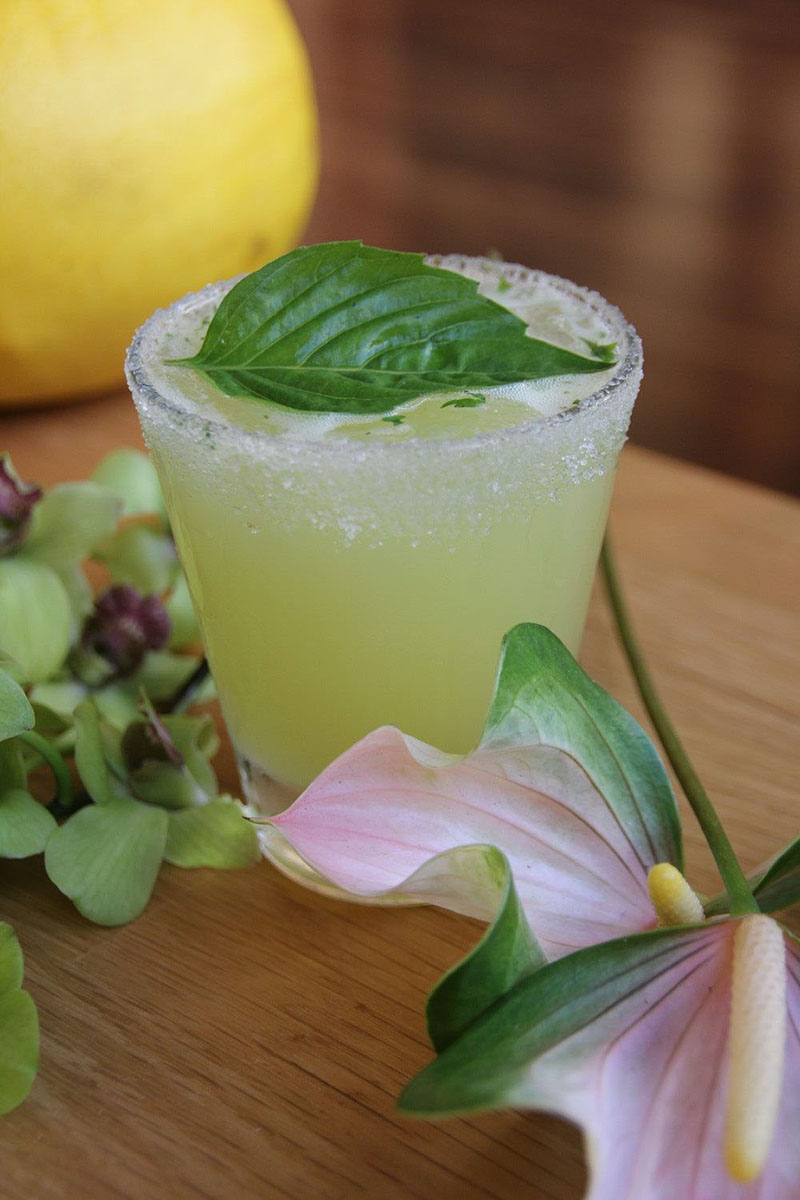 “A good friend of mine has a huge jabong (pomelo) tree in her yard and had nothing to do with all this fruit,” says Hall. “So I happily took a few large bags and made jabong liqueur.” And that’s how the Lucky Devil was created — and it has since become one of the restaurant’s most popular drinks. “It’s called the Lucky Devil because jabong is said to bring good luck in Chinese culture,” he says. Not to mention the rim is spicy and sweet at the same time. That would explain the “devil” part. WHERE: 12th Avenue Grill in Kaimuki 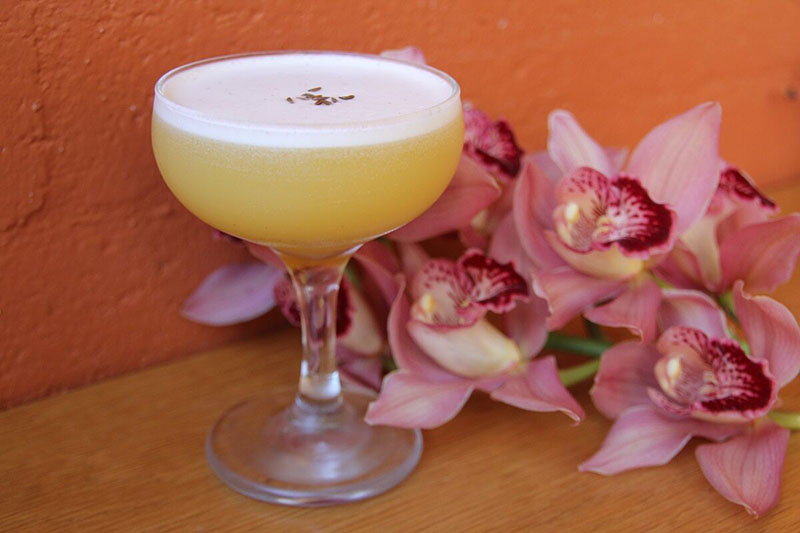 One of the newer drinks on the 12th Avenue Grill menu, Carry Me Away features a housemade syrup using local vanilla, pineapple, orange and lilikoi. It also boasts Koloa Rum, an award-winning premium rum made on Kauai using Hawaiian sugar cane. It’s a personal favorite of the restaurant owners and the local ingredients Hall uses make this a hot-ticket item. WHERE: 12th Avenue Grill in Kaimuki