Jack McCoy pioneered some of the techniques and shots that are now standard in surf cinematography. Here he trails a surfer using an underwater scooter for his latest film, A Deeper Shade of Blue. “For years I've been shooting behind the wave. I call it ‘backstage,’” he says.

A stack of surf movie posters under his arm, 14-year-old Jack McCoy Jr. raced out of his driveway and onto Kalaheo Avenue without even checking for cars in either direction. Kailua was a quiet seaside hamlet in 1962, not yet the busy suburb of Honolulu it is today. Jack Jr. was a poster gremmie, distributing handbills and posters for pioneering surf filmmaker Bruce Brown’s upcoming movie, “Surfing Hollow Days.” It was Jack’s first job, and he delivered posters to the bakery, the supermarket and a little sundry store at Kailua Beach Park.

The night of the showing at Kailua High School, while the kids in attendance hooted for their favorite surfers projected on the screen, a star-struck Jack Jr. watched Bruce Brown intently as he introduced the film, ran to the back of the cafeteria to dim the lights, loaded the reels onto the projector, narrated the film, and fielded questions afterward. Jack stuck around after the event to clean up and talk story with one of his heroes.

The next day, the industrious kid was back on his bike. He collected all the posters he’d hung for the film, took them to school and sold them to his friends. It was Jack’s first entrepreneurial foray into the world of surf films. Five decades and twenty-five surf films later, 65-year-old Jack McCoy is once again “shaking hands and kissing babies” as he calls it, distributing handbills and posters across Oahu for the Hawai‘i premiere of his latest feature documentary, “A Deeper Shade of Blue.” This time he opted for a rental car over a bicycle and canvassed Oahu for three weeks before opening night in February. He visited his hometown of Kailua, friends in Waimanalo and surfers at Sandy Beach. He made his way to the surf shops and grocery stores of Honolulu, up to the North Shore and out to Makaha to catch up with his old friend, surfer Buffalo Keaulana. Though he now resides in Clareville, Australia, his roots have always been in Hawaii, and he’d come home to share a film that he regards as the culmination of his life’s work.

Jack has always been amazed by the beauty of the ocean, especially the view from inside a barreling wave. He was raised near the sandy beaches of Kailua, the reefs of Waimanalo and surfing breaks from Maunalua Bay to Makaha, and he became an avid surfer, bodysurfer, fisherman and paddler—an all-around waterman. But he longed to share that feeling of being inside a breaking wave, a view that only the most daring and skilled surfers are privileged to see, and he wanted to do it through film. 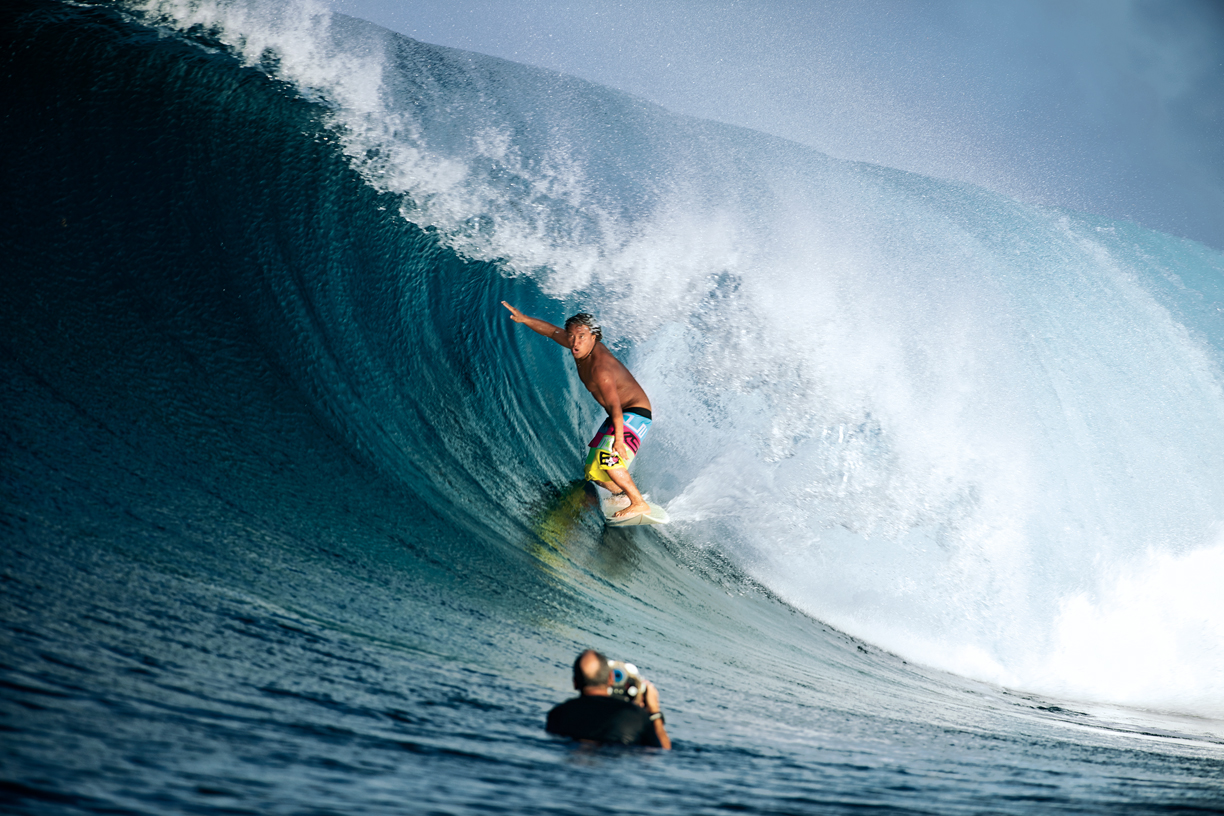 Growing up near some of Oahu's best surf, Jack McCoy was inspired to capture the excitement of being inside a breaking wave.

Under the tutelage of two professional surf filmmakers, Greg MacGillivray and Jim Freeman, Jack got his first break in the “business” after high school, graduating from poster gremmie to their Hawaii distributor. Jack partnered with high school friend and surfer Randy Rarick (now executive director of the Vans Triple Crown of Surfing), and the two went on to distribute the most popular surf films shown in Hawaii until 1970, when Jack traveled with Randy and the Hawaii surf team to Australia as the “thirteenth member” for the World Surfing Championships.

Jack fell in love with Australia. It had the same innocence and small-town charm of the Kailua he knew as a child. “Here was a place where no one locked their car doors or their houses, like when I grew up as a kid in Kailua,” recalls Jack, pulling apart a pair of bifocals that magnetically connect above the bridge of his nose. Jack stayed in Australia, where he continued to distribute surf films for MacGillivray and Freeman. He also pioneered surfing in Indonesia during his “free time,” traveling to Bali with the top surfers of his generation, like Gerry Lopez, who was making a name for himself as the first Banzai Pipeline barrel-riding specialist. He also took up black-and-white photography and began shooting stills and writing for a fledgling Australian surf magazine. Life was good for Jack, who as a kid imagined he’d be content just getting married and having kids in Hawaii.

The two embarked on their maiden filmmaking voyage with no more than a portfolio of stills, a movie camera and raw determination.

Then Jack had a run of bad luck that altered his world. First he was forced out of the film distribution business by a major surfwear company. Always inventive, Jack figured he’d open a restaurant, surf all day and work all night. But being a restaurateur proved more work than he bargained for, and he soon became disillusioned. Then a skiing accident gave him a major concussion that slowed his speech and left him with “a bit of amnesia.” During that six-month haze, Jack spent a lot of time staring at the ocean, so friend and fellow photographer Dick Hoole decided to administer some therapy. He put a Bolex movie camera in Jack’s hands and suggested they start filming the best surfers on Australia’s Gold Coast they could find.

The two embarked on their maiden filmmaking voyage with no more than a portfolio of stills, a movie camera and raw determination. Jack and Dick would produce four films between 1975 and 1983, venturing from Australia to Indonesia to Hawaii. Jack can laugh about the many mistakes they made, but the experience taught him valuable lessons in filmmaking about content, quality, and how to get the kind of water shots that inspire a viewer. “Experience is what you get when you don’t get what you want,” says McCoy, repeating one of his many aphorisms.

Jack knew the beauty of surfing would best be captured from the water; he’d learned that from the classic Bud Brown surf films he’d seen as a kid. Those shots are de rigueur for surf films nowadays, but back then the technology was limiting: Cameras were big and bulky, and only a handful of photographers had the ingenuity to build water housings, much less figure out how to manage their equipment in the ocean. Jack was one of those few. He saved up to buy a military high-speed camera, built a crude water housing, and mastered the technique of capturing footage inside the barrel. 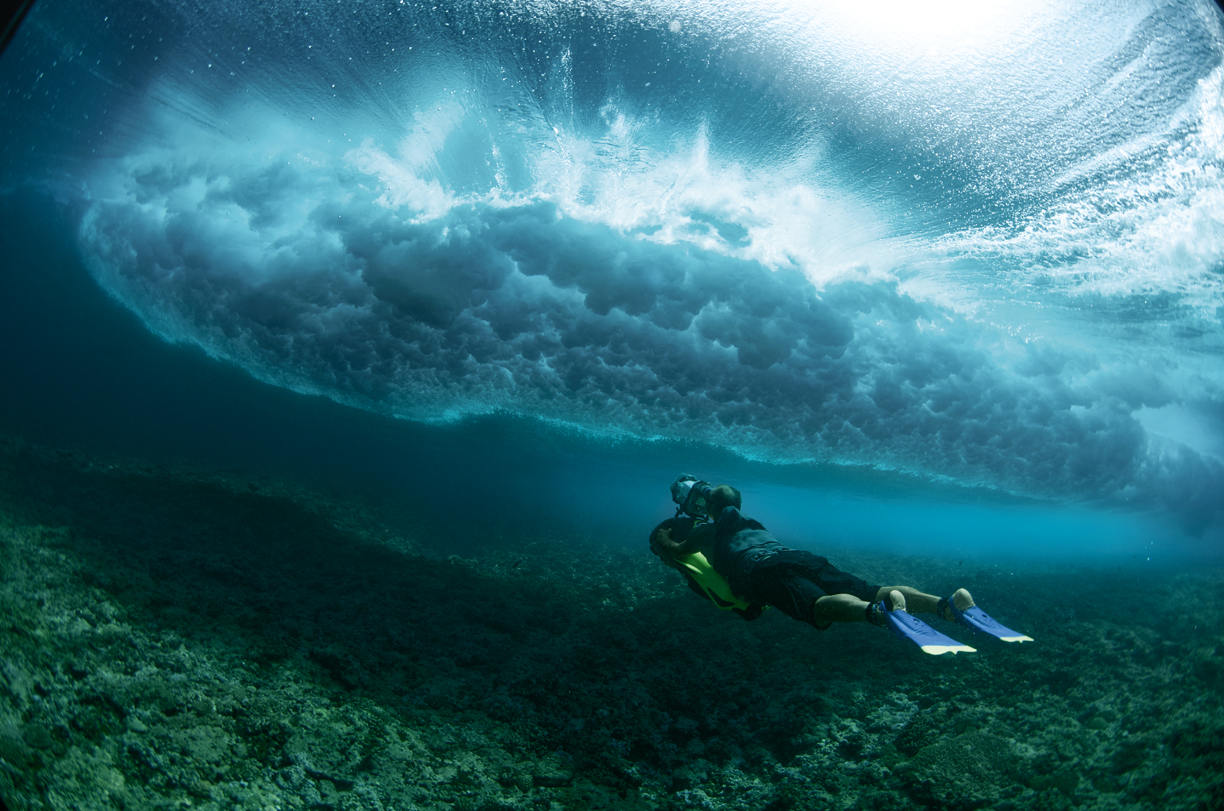 Years of experience with big, bulky camera equipment taught Jack a lot about how to capture sufing on film. That mastery carries over to the sleeker, high-tech equipment of today.

With a lanky, six-foot-four frame, long arms and a lifetime of experience in the ocean, Jack was a natural in the water, even in the most dangerous surf. His greatest career success came from capturing surfer Laird Hamilton as he pulled into a thick, monstrous barrel at Teahupoo, Tahiti, on August 17, 2000, a wave once thought to be unsurfable. Hamilton’s ride changed what was thought possible for surfers, and Jack’s historic footage became the centerpiece of his 2001 film, “To‘: Day of Days” and was the climactic scene in 2005’s “Riding Giants.”

But even before that famous ride, Jack had set new standards in surf filmmaking with the four videos he produced for Australian surfwear company Billabong from 1989 to 1994: “Bunyip Dreaming,” “The Green Iguana,” “The Sons of Fun,” and “Silk Joy.” Jack’s films went deeper than their visuals. He wove storylines and featured surfers’ personalities, all with the lighthearted wit that’s become a hallmark of his films. In the process, he did more than just make surf films; he became synonymous with Billabong’s brand image.

Jack went on to produce ten more films with Billabong, at the feverish pace of a film a year. His work expanded to include commercials for international companies and ocean sequences for feature films. Jack owes his workload and success to advice he was given as a young man: “If your heart’s in the right place,” he says, “it will all come to you.” With the completion of his twenty-fifth film, Jack believes it has.

He will be the first to let you know that “A Deeper Shade of Blue” is not a surf movie, but a documentary tracing surfing’s origins and the evolution. And one more thing: Don’t call surfing a sport, because Jack has for decades strived to portray surfing as an aesthetic experience. “I’m back in the Mickey Dora belief that surfing is an art, a ballet, a dance,” says Jack, referencing the Malibu icon who set the bar for stylish surfing during the 1950s and ’60s. “You’re riding this little piece of plastic on this moving piece of water,” he says wistfully, then suddenly growls, “That ain’t no sport! That’s just skill, art and absolute magic as far as I’m concerned.” 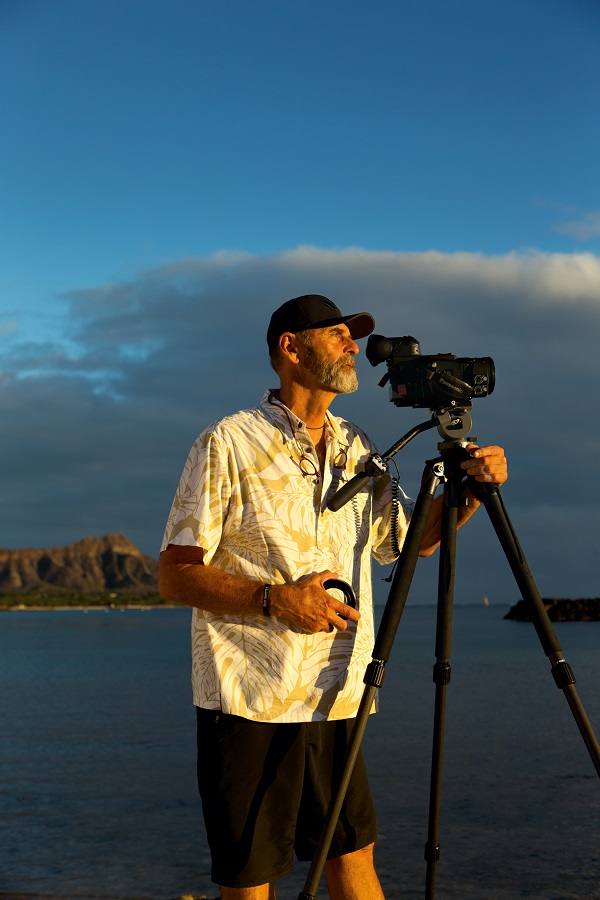 Now 65, McCoy's made twenty-five films over a thirty-year career that's taken him all over the globe. For his new film, which documents the history of surfing, he's returned o the Island where he grew up. “You can take the boy out of Hawaii, but you can't take Hawaii out of the boy,” McCoy says. “My roots are here. I came back to give Hawaii this film...to share what surfing is, what it really is. Without Hawaii, we wouldn't have surfing.”

To build a visual history of surfing, Jack tapped his huge network of friends all over the world for archival imagery—eighty-two contributors supplied stills and footage. But Jack doesn’t rely only on past work. “A Deeper Shade of Blue” features a new underwater perspective, one Jack’s been working throughout his career to master: filming waves from underwater not just as they pass by a stationary camera, which is a standard technique, but by riding a hand-held underwater Jet Ski behind a breaking wave as it barrels down the reef. The resulting images are fluid and surreal, and the crystalline water allows the viewer to watch the surfer riding, complete with the mountains and blue sky in the background. It’s a perspective he’s been working to share with the world ever since Jack Jr. looked out of his first barrel in the Kailua shorebreak and found his calling.

With his latest film, Jack says he wanted to share the story of the roots of surfing with as large an audience as possible—not just with surfers, many of whom already know the history—to inspire an appreciation of both the art of surfing and the ocean. “That’s my thing in life, to share a gift,” says Jack. “The great surfers in the film made major contributions to what we know today. Without them and without Hawaii, we wouldn’t have surfing,” explains Jack, clipping his bifocals back together. “If it weren’t for people in Hawai‘i making surfboards out of wood and putting kukui nut oil on them in their backyards, and this magical connection to the waves that we ride and slide on, we wouldn’t have surfing. And for me, this is everything I’ve learned.”

vol. 16, no. 2 This article first appeared in the August/September 2005 issue of Hana Hou! The Magazine of Hawaiian Airlines