Photo above by Dana Edmunds, based on an earlier image by Lopaka Kuali‘i; all lei courtesy of helemelebotanicals.com

March 6, 1979 was a day of kona winds, the nearly still air and heightened humidity compounding what was already a weighty day. The president of Hawaiian Airlines, John H. Magoon Jr., wore a worried expression while reporters crowded around a small propeller plane bound for Moloka‘i. Sharyn Emminger and Karen Squyers looked at each other and rolled their eyes.

“For goodness’ sake guys, we do this all the time,” Emminger remembers thinking.  “This” being ﬂying—Emminger had been  a pilot for six years by then. A few months earlier she had ﬂown this very plane on  a much longer, much more circuitous route:  From Ireland, where the aircraft was made,  to Rome, Cairo, Bahrain, Karachi, Calcutta,  Malaysia, Singapore, Borneo, the Philippines, Midway and, ﬁnally, Honolulu. Along the way, she’d battled a food-borne illness and ﬂown into Iranian airspace as the Shah was being overthrown.

Still, what was happening on that March day was groundbreaking: The ﬁrst all-female crew to ﬂy a scheduled ﬂight in the United States, with Emminger as captain, Squyers as ﬁrst ofﬁcer and Trude Asada as ﬂight attendant. Today Emminger admits it was thrilling to make history, even if it seemed like everyone were expecting them to fail. “We had the press on board and television cameras ﬁlming out the window just in case we botched the landing,” she says. They didn’t. 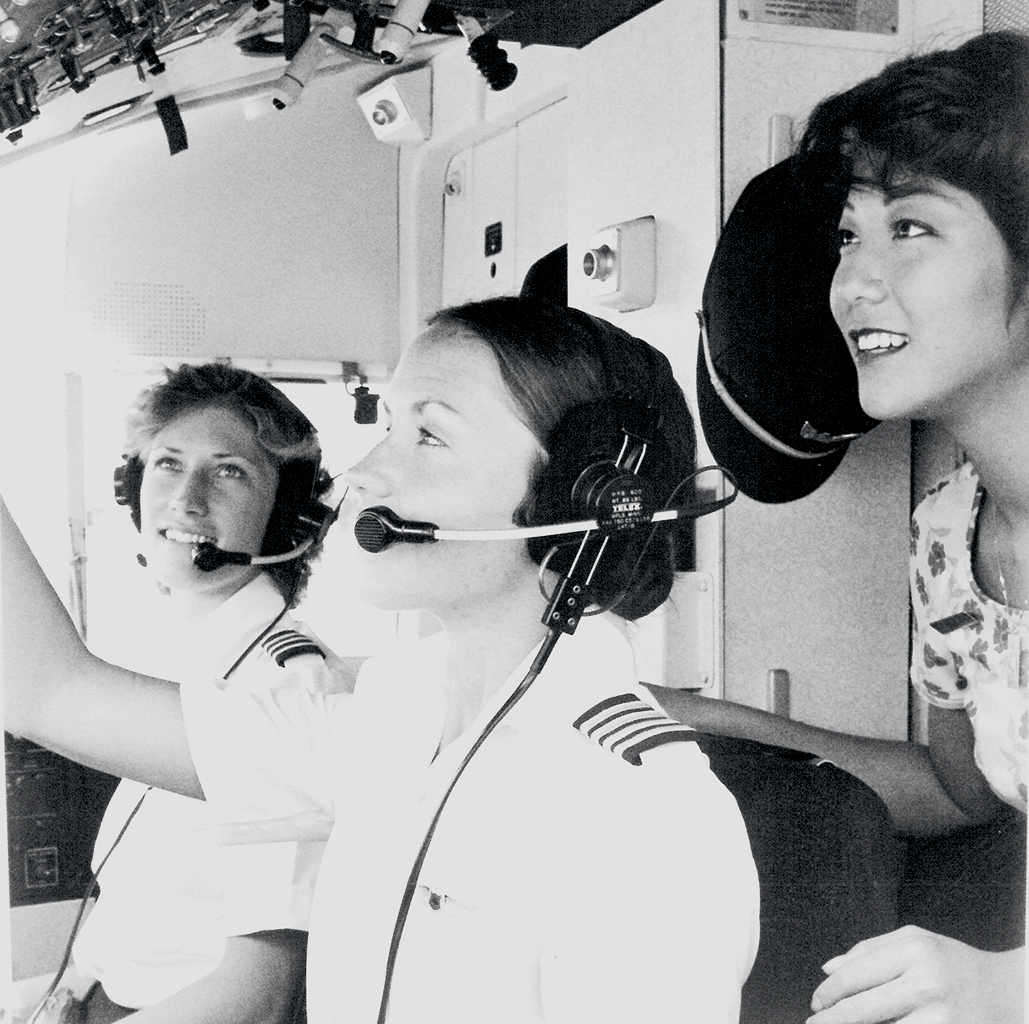 Emminger was Hawaiian Airlines’ ﬁrst female pilot, hired just a few months before that well-publicized ﬂight. At the time, there were only about three hundred female commercial pilots in the United States, and it was only two years earlier that a US airline named its ﬁrst female captain, Emily Howell Warner. (In 1933, Helen Richey was hired as the ﬁrst female co-pilot for a commercial American airline, but within a year the all-male pilots’ union forced her out.)

“I had no choice, you see,” says Emmin- ger when asked how she got into ﬂying. Her paternal grandfather had his own plane  in the 1920s and taught his wife and then  his son how to ﬂy. Meanwhile, her maternal grandfather ﬂew in the Cleveland Air Races, cross-country ﬂying competitions launched by publisher Ralph Pulitzer in 1920. When she ﬁrst climbed into the cockpit as a teenager, she was her father’s co-pilot. “It was a family thing—something I did with my dad, and I just loved it, and so did he. He said he’d go to clear his  soul.” Emminger retired in 1993, but the family tradition lives on: Her son, Reid Emminger, is a pilot for Hawaiian. 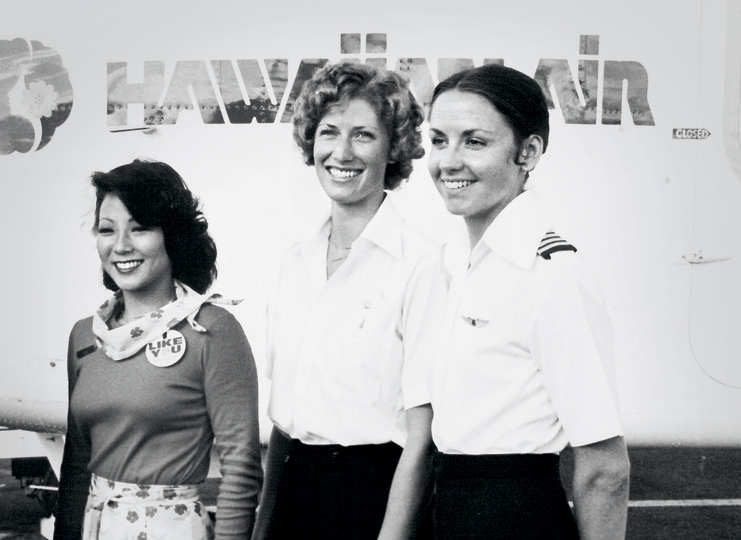 When Sharyn Emminger started at Hawaiian Airlines, she says, “Some of the older gentlemen looked at me a little cross-eyed.” This is unfortunate but not surprising: For much of its history, the industry has been largely male-dominated. Even the ﬁrst cabin crews were all male:  It wasn’t until 1943 that Hawaiian began hiring female ﬂight attendants as men left  to ﬁght in WWII. In the beginning, the airline took its name quite literally: Only those with Native Hawaiian ancestry could be employed as “air hostesses.”  Today, some of the stories read like an HR nightmare: The hostess rule book required the women to be slender, between ﬁvefoot-two and ﬁve-foot-six, and they had to wear seamed nylon stockings, two-inch heels and girdles. Hair was cut to collar length, though hula dancers were allowed to keep their hair in an updo. Forbidden were acne and glasses.

Even so, Hale Rowland says it was a “glorious” time that she still loves to reminisce about now, as she prepares to celebrate her ninetieth birthday, coincident with the airline’s ninetieth anniversary. “It was fun, it was exciting, it was an education about all the Islands—you had to know history so you could tell people what Hawai‘i was all about. And you met so many wonderful people.” Passengers included the von Trapp family of Sound of Music fame, Richard Nixon and one baby who decided she would enter the world  at eight thousand feet on a ﬂight between  Honolulu and Kahului, Maui. When Mauna  Loa erupted in 1950 and then Kïlauea in 1955, Hawaiian recruited students at the University of Hawai‘i to be part-time host- esses for special sightseeing ﬂights over the volcanoes. Rowland remembers that many of them would work a month, marry and quit. But a few would become pilots themselves, like Eula May Hodges Sweet, who also raised two sons who are pilots with Hawaiian today. 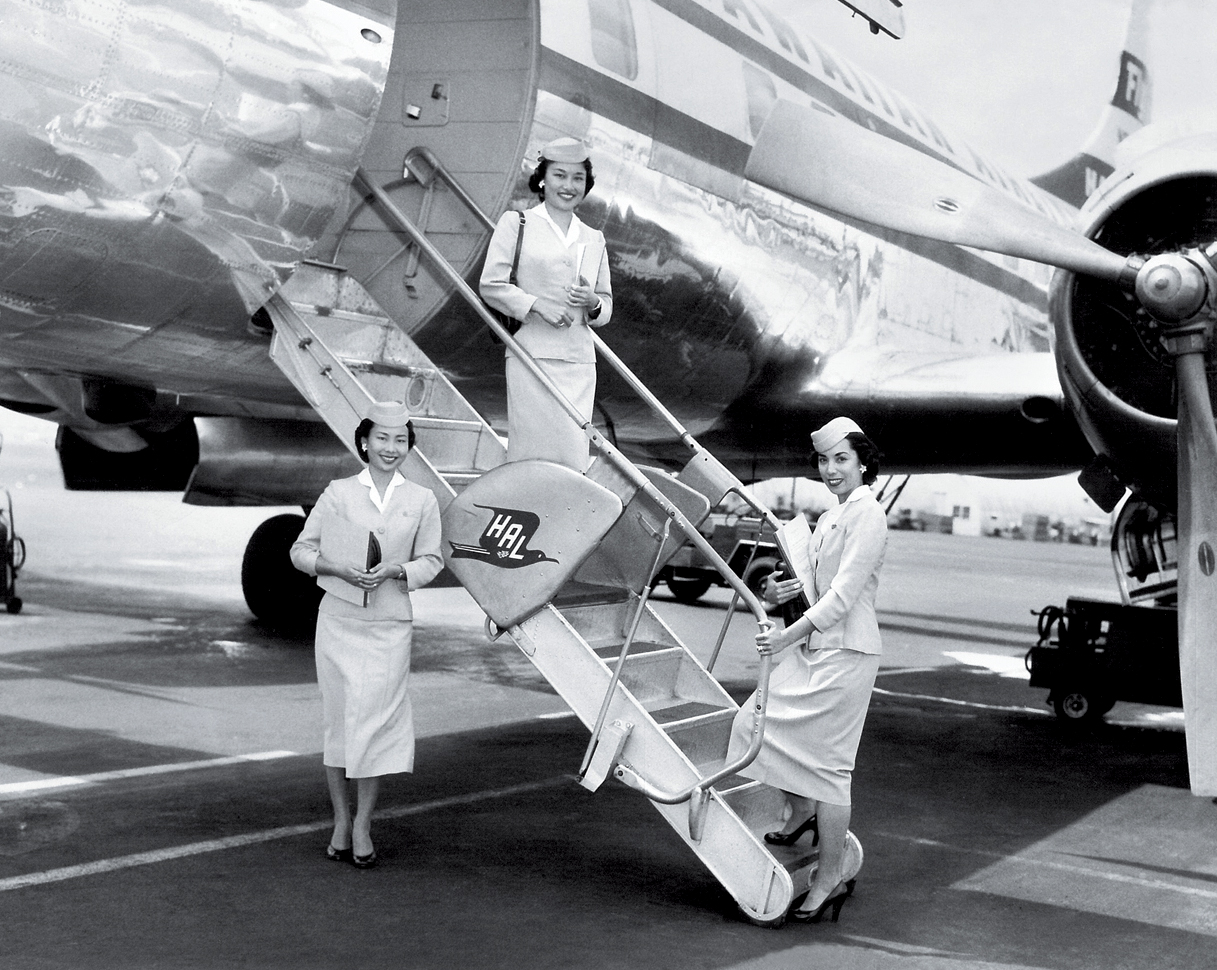 Like most of its contemporaries, Hawaiian initially hired only male flight attendants. In 1942, as Island soldiers left to fight World War II, women began to fill a variety of positions. Hale Rowland (above right)  was among Hawaiian’s first female flight attendants. As times changed, so did the airline’s branding— the 1970s (opposite page) saw the advent of bright and bold colors … as well as more wähine employees. Photo courtesy Hawaiian Airlines.

These days, Hawaiian Airlines employs a higher percentage of female pilots than any other US carrier—of the company’s 842 pilots, 81 are female. That works out to 9.8 percent, as compared to 6.6 percent for domestic airlines as a whole. Twenty-four of those pilots have achieved the rank of captain. Internationally, few airlines in the world break into double digits when it  comes to the percentage of female pilots, with India’s Zoom being by far the global leader at thirty percent—but Zoom employs only thirty pilots in total, so it’s a  bit of a statistical outlier.

In addition to its higher proﬁle “above the wing” jobs—that is, pilots and ﬂight attendants—Hawaiian Airlines has in recent years been actively working to increase the overall number of women in less visible roles throughout the company. Currently, 29 percent of its overall workforce is female; within that cadre Darling Orencillo stands out—she is a mechanic and a graduate of Hawaiian’s Aircraft  Mechanic Apprenticeship Program, a three-year-old partnership between the airline, Honolulu Community College (HCC) and the International Association of Machinists and Aerospace Workers union. The program provides on-the-job experience for candidates as they work toward obtaining their Airframe and Powerplant (A&P) license, a Federal Aviation Administration certiﬁcation. To be eligible, applicants must be enrolled in an FAAaccredited school—such as HCC—for a minimum of six months and be in the process of obtaining their A&P license. Participants who earn their license and demonstrate strong performance are guaranteed a position with Hawaiian Airlines as full-time aircraft mechanics. 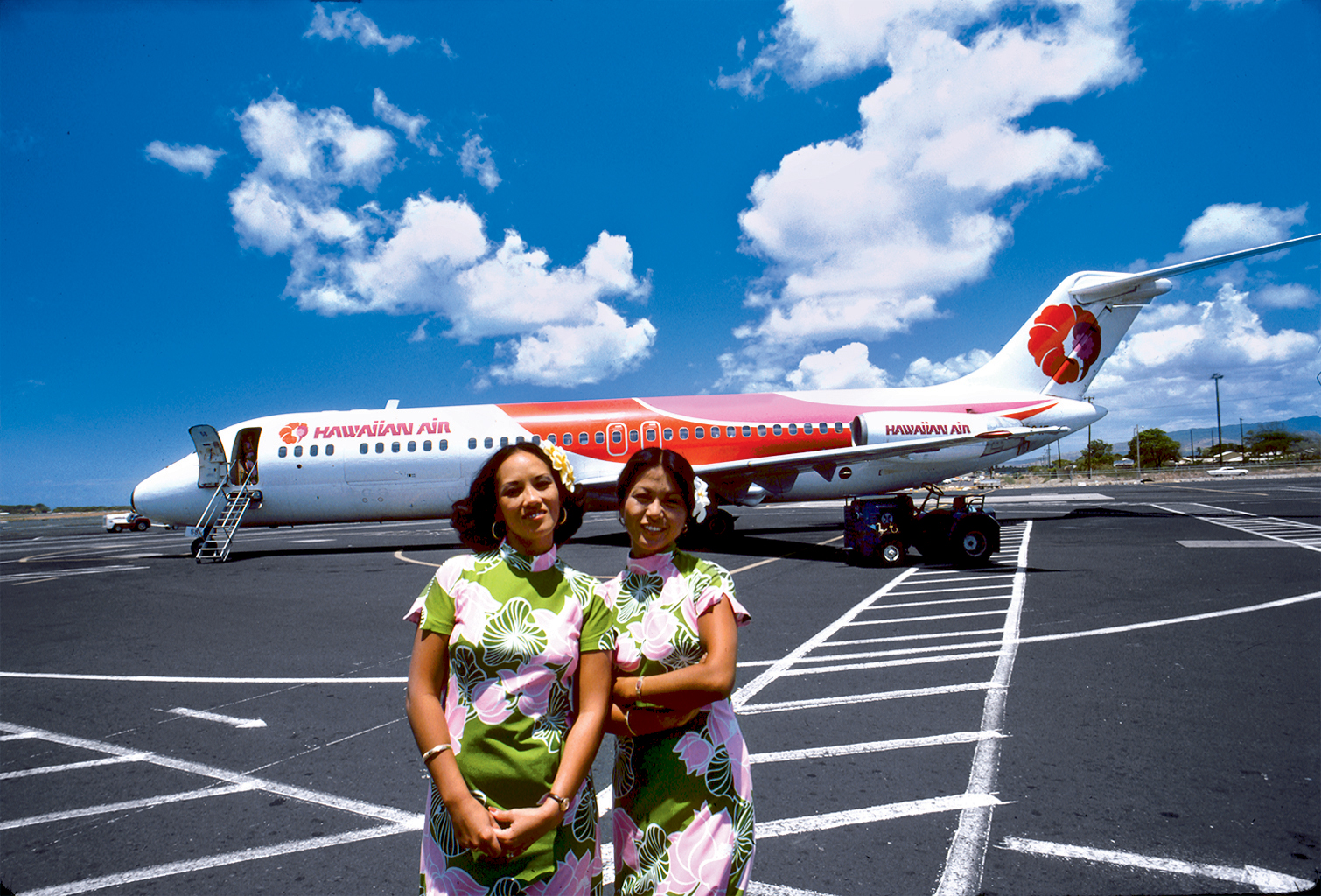 Evelyn Greene, an aeronautics professor  at HCC, admits that she holds women who come through the program to an extremely high standard. This because they are so visible in their scarcity: In the industry as  a whole, only about two percent of airplane mechanics are women. Of Hawaiian Airlines’ 362 aircraft mechanics, seven are women (with one more currently serving  as an apprentice). “It’s very easy for folks to take the one female mechanic that they’ve ever worked with and stereotype the rest,” Greene says. “So I tell all my women, ‘You gotta be better than everybody else.’”

Orencillo ﬁrst got the idea to study aviation maintenance from her brother, who is a lead mechanic at Hawaiian Airlines. She was Greene’s student, and today she’s hopeful about recent initiatives at the air- line aimed at boosting the visibility of jobs like hers. “Normally, nobody tells women we can do this, too,” she says. “We don’t have other women saying, ‘Hey, try this.’” Hawaiian Airlines’ Women in Aviation  employee resource group is one way the word has begun to get out. Formed in 2017 as a chapter of the nonproﬁt Women in  Aviation International, the group’s mission,  says Kanani Kealoha-Faleaﬁne, is to promote and encourage networking and advancement in all aviation careers. Kealoha-Faleaﬁne, who was serving as vice  president of the group at the time of this writing (it’s an annual, volunteer position) came to Hawaiian Airlines as a baggage  handler and is now a manager in the loyalty services department. “We support HR in recruiting employees for the airline, as well as working on an internal support system to reduce isolation and separation when you’re in a male-dominated role or area,” she says. The Women in Aviation group also organizes an annual Girls in Aviation Day, which introduces young women to different roles in the company, particularly in male-dominated ﬁelds like aircraft mechanics and information technology. Through this event, the airline wants to show that there are jobs beyond the more high-proﬁle pilots and ﬂight attendants.

The desire for career growth and dynamism in her day-to-day work is what led Tracy Freitas to the airline industry.  In her role as Hawaiian’s neighbor island cargo manager, she is involved in everything from the marketing of the airline’s express shipping service to overseeing cargo operations from her home base on  Maui. Freitas notes that it’s not just people that planes ﬂy but also an ever-changing array of cargo: Medical supplies, queen bees, papayas, antlers from hunting trips and injured endemic birds (which are airlifted to a rehabilitation center on Hawai‘i Island). There’s also a lot of bread. Seven days a week, Hawaiian shuttles Love’s Bakery white and wheat bread throughout the Islands. 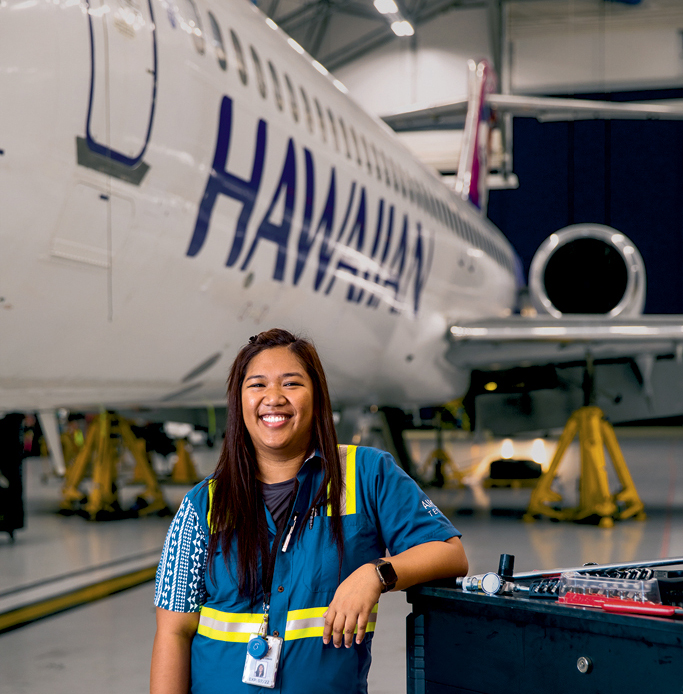 A growing number of women are filling traditionally male-dominated positions throughout the airline industry. Aircraft mechanic Darling Orencillo (above) is among those paving the way. Photo above by Dana Edmunds.

Freitas came to Hawaiian when she was 21. Back then she was studying marine sciences full-time at the University of Hawai‘i and raising a six-month-old daughter. What was initially a side gig boarding passengers on planes as a wing agent has turned into a nineteen-year career at the company. “Even though I got trained in something completely different, marine science, when I got into Hawaiian, all these windows of opportunity opened,” she says. “I wanted to be a career woman— I thought it’d be nice to carry a briefcase, wear a nice suit. Hawaiian gave me that opportunity to grow and develop. That’s why I stayed: I fell in love with the  company and industry.”

Freitas’ tenure shows the diversity of jobs outside of the plane: In addition to that ﬁrst wing agent job, she has worked as  a policies and procedures writer in the Honolulu corporate ofﬁce and an assistant station manager on Maui, overseeing  nearly three hundred employees, including  the plane cleaners, customer service agents and baggage handlers. Airline work is challenging and constantly changing, which is why Freitas believes an inordinate number of Island women are drawn to  working on “the ramp”: On Maui, guests regularly comment on how many women there are in the cargo department. “Cargo is  a hybrid position—one side of the fence, you interact with the customers and on the other side, it’s physical work, a lot of heavy lifting … it’s a nice balance,” she says. “There are lots of strong, capable women on Maui and the neighbor islands. You never hear, ‘You’re a woman, you can’t handle it.’ Everybody knows we’re gonna get the job done.”

vol. 22, no. 5 This story first appeared in the October / November 2019 issue of Hana Hou! The Magazine of Hawaiian Airlines