A proper visit to Hawaii requires immersion into its plentiful, storied food culture. It’s the essence of the islands. The Hawaii Food & Wine Festival, August 29 to September 13, offers such an authentic epicurean experience.

The festival was co-founded by Roy Yamaguchi and Alan Wong, two of Hawaii’s most renowned chefs and longtime Hawaii restaurateurs (Roy’s and Alan Wong’s respectively). It all began with a small dinner. For more than a decade, Yamaguchi hosted a dinner party at his original Roy’s in Hawaii Kai, on Oahu’s east side. “I would invite my chef friends to participate and cook and raise money and awareness for the farm bureau,” he says. One night after the annual dinner, he brainstormed out-loud about “trying to do it full scale,” he says. “The rest is history.”

Founded in 2010, the Hawaii Food & Wine Festival (HFWF) celebrates its fifth anniversary this year. It has since expanded to three islands—Oahu, Maui, and Hawaii Island—and become a culinary and cultural tour de force that makes the Islands a true food destination.

“(With HFWF) we’re saying to the world, ‘come see what we’re doing here in Hawaii,’ says Yamaguchi. “We want to showcase how we live, how we respect our culture and respect our farmers, fishermen and ranchers.” 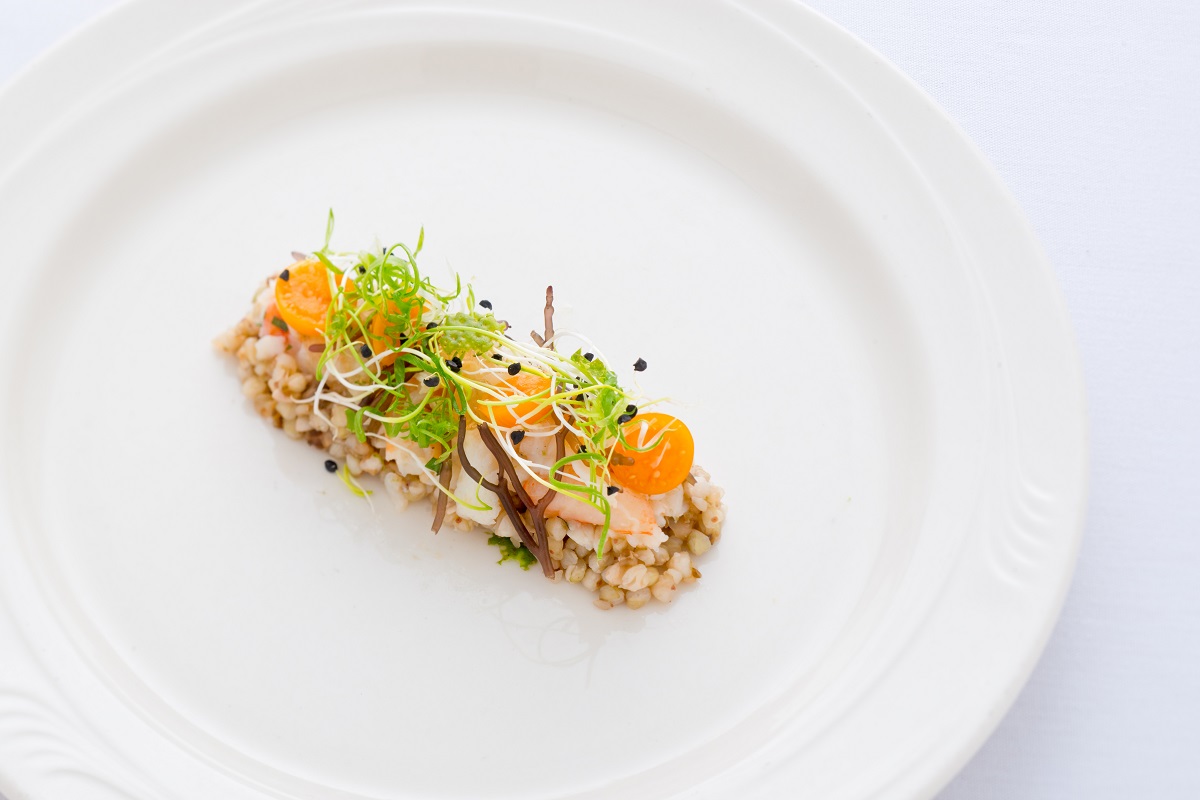 In many ways the festival has come full circle for Hawaii Regional Cuisine. Yamaguchi, Wong and 10 fellow Hawaii chefs developed the concept in 1991 in a spare Maui Prince Hotel banquet room. The chefs met to talk about how to partner with farmers and avoid shipping in certain foods. Their talks turned into a culinary movement, in which local chefs continued to draw on the Islands’ diverse ethnic cooking styles and capitalized on locally sourced ingredients. “The Hawaii regional chefs worked together with farmers and now the festival has become the event where we put the chefs together with farmers, ranchers, fishermen. It raises the bar of what Hawaii has to offer,” says Yamaguchi.

This is the HFWF event for wine lovers. Set on the rooftop of the Hawaii Convention Center, Corks and Forks features 20 renowned red wines from the Pacific Coast. “It has a huge touch and feel,” says chef and festival co-founder Roy Yamaguchi. “And of course, great chefs and great wines.” Each wine is expertly paired with toothsome tastings featuring fresh, local ingredients. White wines, handcrafted cocktails and specially selected beers are also available. Don’t miss out on the art exhibit and the silent auction. Click here for tickets.

And that’s what sets the Hawaii Food & Wine Festival apart from the dozens of other food and wine festivals across the country. The HFWF not only spotlights local, national, and international chefs and their creations of culinary excellence, but Island culture itself. Whether it’s the unique cuisine of Hawaii Island, a contemporary Hawaiian luau, or imbibing with master sommeliers, the festival seamlessly interweaves the unique foods, places and culture of the Hawaiian Islands into one food event. “Most food festival (attendees) come and go and the chefs cook and then they’re out the door,” says Yamaguchi. “For us, we make it a point to get the chefs to learn about Hawaii.”

It doesn’t hurt that the Hawaii Food & Wine Festival was named one of the Travel Channel’s best food and wine festivals, and one of the top 15 in North America by Fodor’s Travel.

... the Hawaii Food & Wine Festival was named one of the Travel Channel’s best food and wine festivals ...

This year, approximately 100 chefs and culinary specialists are participating in the festival, half of whom are from the U.S., Japan, China, New Zealand, Australia, and the U.K. Yamaguchi says guest chefs visit Hawaii’s farms and ranches, the Honolulu fish auction, the Chinatown market in Honolulu, and even learn to pull kalo (taro) from loi (traditional Hawaiian irrigated terraces). “That’s why it’s important that the chefs that we bring out to Hawaii are committed to wanting to learn more about Hawaii’s culture,” says Yamaguchi. “They bring that spirit back to wherever they come from, whether it’s a foreign country or a Mainland destination city. They are our culinary ambassadors of the state and the festival.”

The name says it all. This event honors the legendary talent manager, agent, and producer Shep Gordon. Gordon is known for managing musicians such as Alice Cooper and for popularizing the celebrity chef—he also managed chef Emeril Lagasse. Gordon was also integral to the Hawaii Regional Cuisine movement. “I was asked by Roy (Yamaguchi) and Alan (Wong) if I could do a dinner, highlighting my career in the culinary world,” says Gordon. “I was happy to do it.” Toast Gordon’s achievements during a six-course dinner prepared by his closest chef friends at the Hyatt Regency Maui Resort and Spa. Click here for tickets.

It’s also an extraordinary experience for Hawaii’s talent and its culinary students studying to be the islands’ next generation of chefs. Shep Gordon, a respected talent manager, agent and producer, known for managing musician Alice Cooper and chef Emeril Lagasse, says HFWF gives local chefs worldwide exposure. “The festival presents the new, young chefs today,” says Gordon. “They’re the next wave of Hawaii chefs and this showcases their talent.” For culinary students, who prep next to some of the industry’s top chefs, it’s often a “life changing experience,” adds Yamaguchi. “It’s important to give back to our students.”

Giving back is big for the food and wine festival. In fact, HFWF has seven community beneficiaries, including the Hawaii Agricultural Foundation, the Maui Culinary Academy, Paepae o Heeia, and Papahana Kuaola. Gordon sees community involvement as a natural extension of the festival, and of many chefs’ congeniality. “That’s what chefs are about,” he says, “they’re about servicing people.”

For eclectic tastings of Hawaii, at some of its most stunning venues, there’s no better event than the Hawaii Food and Wine Festival. It’s a festival that truly connects the food of the Islands, with the culture of Hawaii.