One may still notice the iconic phrase on a bumper sticker or T-shirt decades after big-wave surfer, voyager and lifeguard Eddie Aikau made a lasting impact as a legendary waterman. While the saying has become recognized in local vernacular amongst kama‘āina (locals), visitors who seek out Hawai‘i to enjoy its unique land and seascapes coupled with a unique culture represented by the “Aloha Spirit” throughout the Islands quickly learn that Aikau embodied that quintessential approach to life.

In an ironic twist, it was Aikau’s selflessness in attempting to paddle to Lāna‘i via surfboard to get help for fellow crewmembers who had capsized while aboard traditional Polynesian Voyaging canoe Hōkūleʻa (Guiding Star) that ultimately led to his demise in March of 1978. The ensuing search for Aikau was the largest air-sea rescue venture in Hawai‘i history, but he was never seen again. 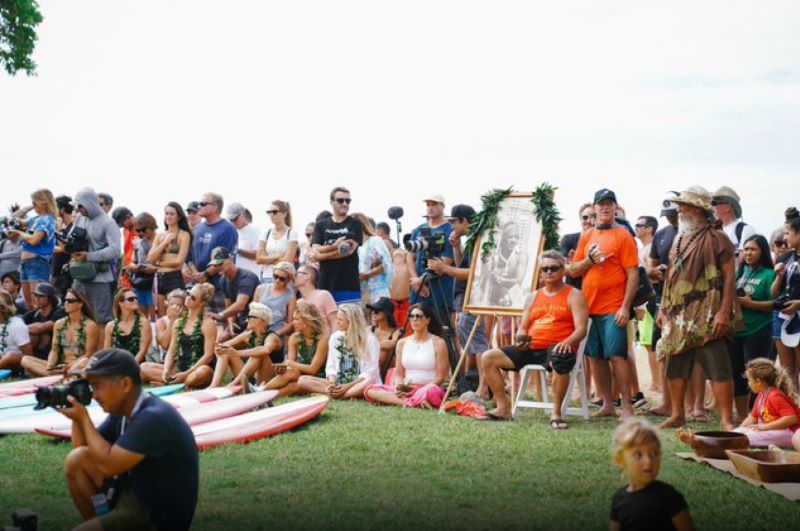 Above: The Eddie Aikau Foundation perpetuates his story and promotes education and the advancement of Hawaiian culture.

Hawaiian Airlines continues its role as a longstanding supporter of The Eddie Aikau Big Wave Invitational as the important event not only recognizes Aikau’s contributions and accomplishments, but also promotes and advances the Native Hawaiian culture and traditions.

“We are honored to help further perpetuate the legacy of Eddie Aikau today as we pay tribute to his bravery as a waterman whose contributions to ocean safety, surfing, Polynesian sailing, education and culture continue to teach and inspire all of us,” said Debbie Nakanelua-Richards, director of community and cultural relations at Hawaiian Airlines, the event’s official airline sponsor.

In addition to supporting the Eddie Aikau Foundation’s annual student essay contest, Hawaiian Airlines is also providing one million HawaiianMiles to be shared by the top three event contestants as well as the winner of a new award, the Hawaiian Airlines Best Wave of the Day.

“We are grateful for the outpouring of support from our community and partners to ensure ‘The Eddie Would Go,’” said Eddie Aikau Foundation President Sol Aikau.

According to reports, Aikau was the first
official lifeguard to patrol Waimea Bay, and
he saved more than 500 people from the
punishing waves. When Aikau was on duty,
not a single life was lost even though some
rescues involved surfers endangered by
30-foot waves. The aforementioned saying
was born because, as many will attest,
Aikau would go when nobody else would
or could.

As a way to honor Aikau’s memory and
carry on his wave-riding legacy, The Eddie Aikau Big Wave Invitational was launched in 1985 and the annual event has earned prestige as the pinnacle of big-wave surfing competitions featuring world-class athletes from around the globe. The event is so popular that, when it was last held in 2016, more than 1.2 million people from 200 countries tuned in to watch the live internet stream; the web feed was so popular in Hawai‘i that businesses had to ask employees not to watch it at work because the attention was bogging down the internet across town. 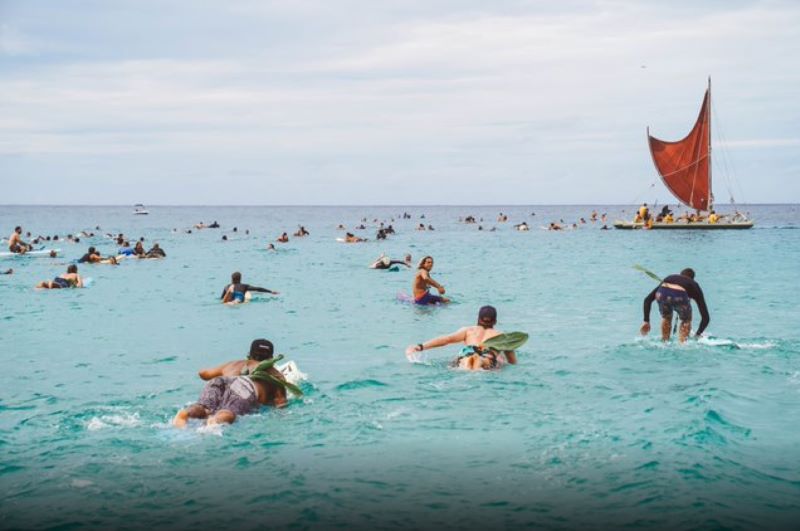 Above: For the Opening Ceremony, surfers paddle out to pay homage to Eddie Aikau and what he represents.

The holding period for the 34th edition of the event began on December 1 and runs through February 29, 2020, at big-wave surfing mecca Waimea Bay, and the contest will run only if surf heights reach 20 feet or greater, and organizers deem the water safe—in relative terms, of course. And, for those who may not be aware of “Hawaiian-style” wave measurement, the 20-foot height is calculated from the water behind the wave to its crest; this means that, in the case of a 20-foot-tall wave, surfers are actually dealing with wave faces of up to 40 feet tall!

“The Eddie was the biggest surfing event ever where all the best surfers in the world came to compete at, and I always dreamed of being a part of it one day,” said Ezekiel Lau, a 26-year-old Native Hawaiian surfer from Honolulu who has been selected as an alternate to participate in the prestigious competition. “As a Native Hawaiian, I’m honored to be in this position. It’s just great that the Aikau family is honoring the Hawaiian culture and keeping Eddie’s name alive – he’s someone who should always be honored.” 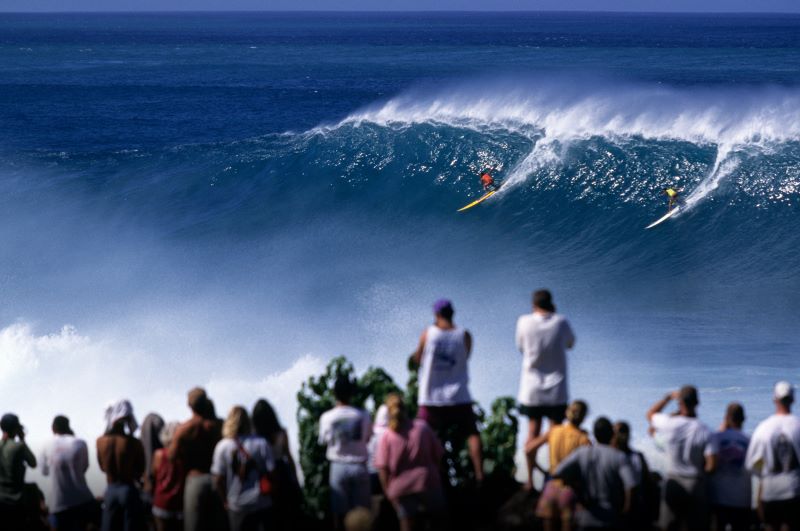 Above: During winter months, quiet Waimea Bay wakes up and roars with humongous waves.

Situated on Oahu’s legendary North Shore surf haven, Waimea Bay was home to Aikau’s record-setting big-wave performance in 1967 that made the waterman a fixture in any conversation about the sport.

Fifty-two years ago, Aikau successfully rode a mammoth wave with an 80-foot face. That incredible ride epitomized Aikau’s skill and bravery, which today’s legion of talented surfers will look to emulate throughout the competition. Waimea Bay and the adjoining Waimea Valley is rich in history and mana (power) as generations of Native Hawaiians cultivated the land there with taro, sweet potato, sugar cane, banana, breadfruit, coffee and ‘awa as well as ‘o‘opu (guppy fish) and ‘opae (shrimp) in the bountiful streams that fed the bay.

Immense crowds of 25-30,000 people routinely pack the beach and surrounding hillside during The Eddie—those who plan on attending the contest should plan ahead for limited access to parking and restroom facilities as well as food and beverages.

Spectators can look forward to watching some of the world’s top big-wave surfers as 55 elite athletes (including an event-record nine women), alternates and legends will showcase their skills if the right conditions arise.

“You get a chance to win a World Title every year, but you only get the chance to win The Eddie (on average) every four years. But, it’s really not about winning, but being part of all the history,” said Kelly Slater, 47, one of the greatest surfers of all time who owns 11 World Titles, 55 career victories, and still holds the distinction as the youngest and oldest world champ in men’s history. “The Eddie is the biggest event in Hawai‘i; it really feels like a Super Bowl. Eddie is our lineage, he’s one of our heroes in surfing and lifeguarding, so to be invited to participate in this event is really special.” 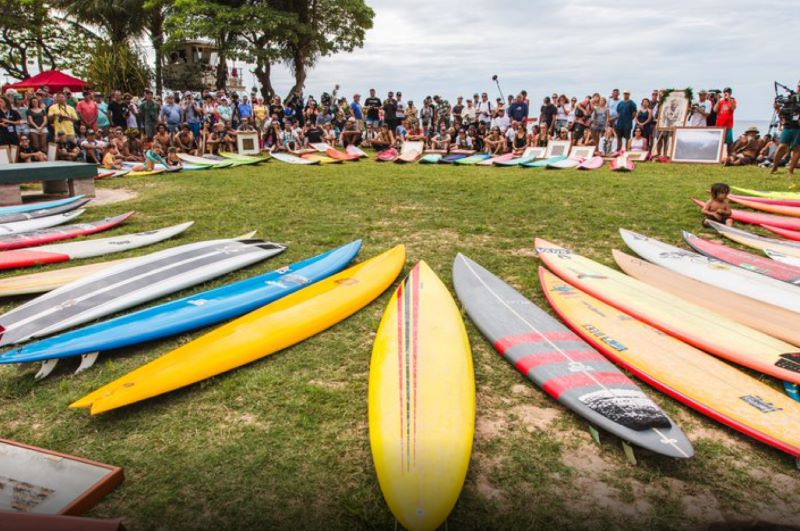 Above: Invitees to The Eddie gather round for a solemn moment during Opening Ceremonies.

Master Navigator Nainoa Thompson, who trained and sailed with Aikau on Hōkūle‘a, shared an anecdote in 2012 about his hero’s legacy-minded mindset prior to the fateful trek on the voyaging canoe.

“About two weeks before we left, we were at the Honolulu Medical Group on the fourth floor getting our medical testing. If you had a heartbeat, you go. You got a couple shots and you were out the door. Eddie was so heroic that I could not even talk to him. But by coincidence, we end up in the same elevator. I was in the elevator with him, I was next to my hero, but he wasn’t with me.

“He was someplace else. He was far away and he was tapping the stainless steel on the (elevator) door. He was far away. When we get to the lobby, he walks out, I leave him alone, he walks into the middle of the lobby and he turns around and says, ‘You know, Nainoa, I need to sail Hōkūleʻa. I need to go down the road of my ancestors. I need to be in their wake. I need to pull Tahiti out of the sea. Bring back dignity and honor to our kūpuna (respected elders). And give it to children.’

“You see, if anybody understood why we are supposed to sail, Eddie did.”

When the winter surf swells dissipate, as is the case year after year, one thing will remain true: Eddie went, Eddie did, and his legacy rides on.

For more information about Aikau and the competition, visit www.eddieaikaufoundation.org.