Above: As paddlers, including those from Red Bull Wa‘a, prepare for the Molokai Hoe and Na Wahine O Ke Kai, they must also take into consideration the rigors presented by the Kaiwi Channel – translated from native Hawaiian to mean “Channel of Bones” due to its 2,300-foot depth and its penchant for hosting harsh weather conditions.

As Hawaii’s state sport, outrigger canoe paddling incorporates strength, endurance, teamwork and an innate knowledge of the water that has seen the pastime evolve from a simple mode of transportation to a competitive outlet that has expanded its reach across the globe.

What: 41st Annual Hawaiian Airlines Na Wahine O Ke Kai and 67th Annual Hawaiian Airlines Molokai Hoe When: Sunday, Sept. 22 and Sunday, Oct. 13, 2019 Where: Hale O Lono Harbor, Molokai, to Waikiki Beach, Oahu (41 miles) Race Time: The women’s race is scheduled to begin at 7:30 a.m. with the top finishers expected to finish around 1 p.m., while the men’s race starts at 8 a.m. with the top finishers expected to finish around 12:45 p.m. Watching the Finish: The best place to catch the action is on the crescent-shaped beach fronting the Hilton Hawaiian Village. Spectators can watch the race’s finish (marked by floating buoys just off shore) and may also greet crews as they come to shore. Recent Champions: In the women’s race, Team Bradley is the defending Na Wahine O Ke Kai champion. Team Bradley has won the race eight of the last 10 years, including six straight titles from 2005-2010. Offshore (Calif.) also won the race six consecutive times (1986-1991) and won the event 10 times out of 11 tries (1986-1996).
On the men’s side, Tahiti’s Shell Va‘a claimed eight consecutive Molokai Hoe victories from 2006-2013. In 2014, Tahitian crew EDT Va‘a, which is named for an energy company, upset Shell to win the title in 2014, but Shell Va‘a reclaimed the title in 2015. Lanikai was the last locally-based crew to claim the men’s Molokai-to-Oahu hardware in 2005. Record Times: Team Bradley (women) set the current record time of 5 hours, 22 minutes and 5 seconds in 2008, while Shell Va‘a (men) set the event record time of 4 hours, 30 minutes and 54 seconds in 2011.

Thousands of years ago, Polynesians and those from other wayfinding cultures used canoes as a means of exploration, and relied on the stars, wind and ocean currents to carry them throughout the many islands scattered within the South Pacific. As these new cultures grew, canoes became ideal vessels for transporting goods between various islands and far-away settlements and also allowed fishermen to venture out into the open ocean and secure food for their villages. Canoes even played a vital role in the conquest of budding empires, including the one built by King Kamehameha I as he convened hundreds of canoe builders to create a fleet of boats that would eventually be used to unite the Hawaiian Islands under his reign.

Fast forward to present day, and it is clear to see that the outrigger canoe has undergone a renaissance of sorts as the vessel is now used primarily for racing and recreation. The six-person vessels, which were once crafted from enormous hard-wood trees like koa, are now built from fiberglass and other space-age materials that, in some cases, make the boats lighter, faster and stronger than their wooden counterparts.

Above: Red Bull Wa‘a, which is based on the Big Island, and Team Primo of Maui represent some of the local favorites poised to vie for the prestigious Molokai Hoe hardware. However, crews from Hui Nalu, Kailua, Lanikai, Hui Lanakila, Healani and Outrigger Canoe Clubs have also showed promise during both the summer regatta sprint season and the long-distance season. Photo credit: Red Bull

Outrigger canoe paddling has expanded to reach a worldwide audience of both participants and spectators, and that convergence of cultures and approaches to canoe racing will be on display at the 41st Annual Hawaiian Airlines Na Wahine O Ke Kai on Sunday, Sept. 22. The 41-mile race, which is often regarded as the “Super Bowl” of outrigger canoe paddling, spans from Hale O Lono Harbor on Molokai to the beach fronting the Hilton Hawaiian Village in Waikiki and gets underway at 7:30 a.m. with the first canoes scheduled to finish around 1 p.m. The grueling race runs through the Ka‘iwi Channel, which in Hawaiian means “Channel of Bones” in reference to the ominous ocean and weather conditions that make crossing the expansive body of water extremely dangerous. In 2015, the women’s race was actually cancelled because of high surf that forced officials to scratch the event out of concern for participants, officials and support crews. 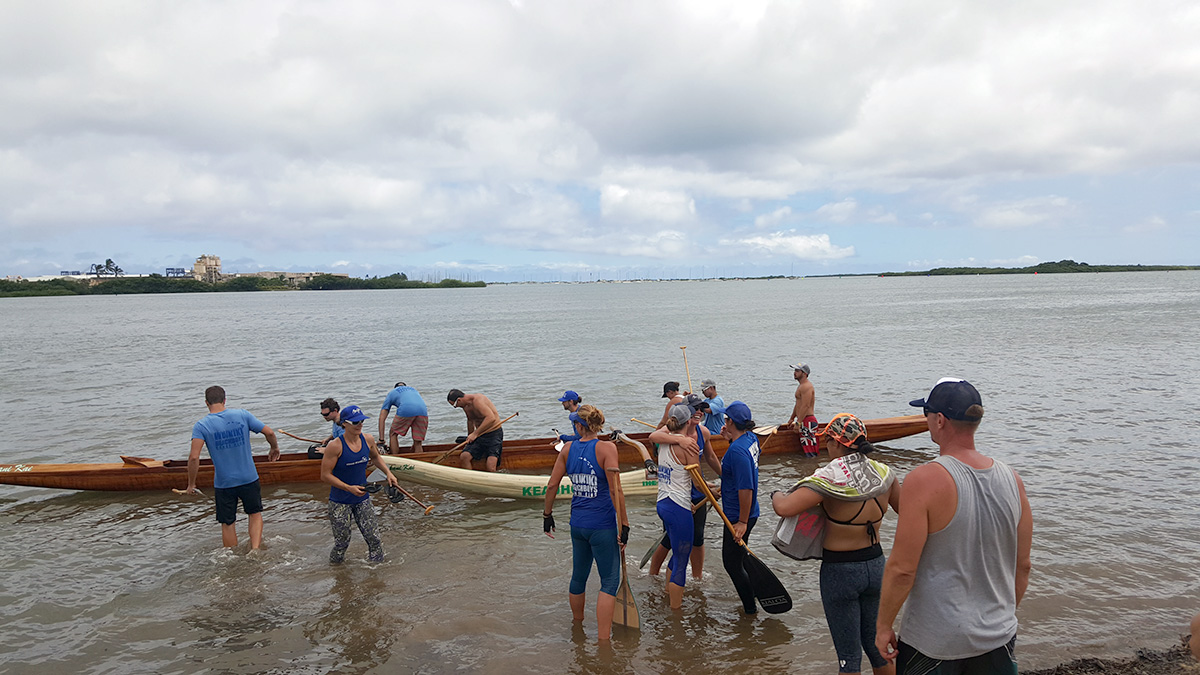 Three weeks later, on Oct. 13, the men will take their turn across the channel via the 67th Annual Hawaiian Airlines Molokai Hoe. The Molokai-to-Oahu races are expected to draw more than 100 crews and over 1,000 paddlers apiece from paddling hotbeds including Tahiti and Hawai‘i as well as across the United States, from California to New York, as well as Europe, Asia and Australia. 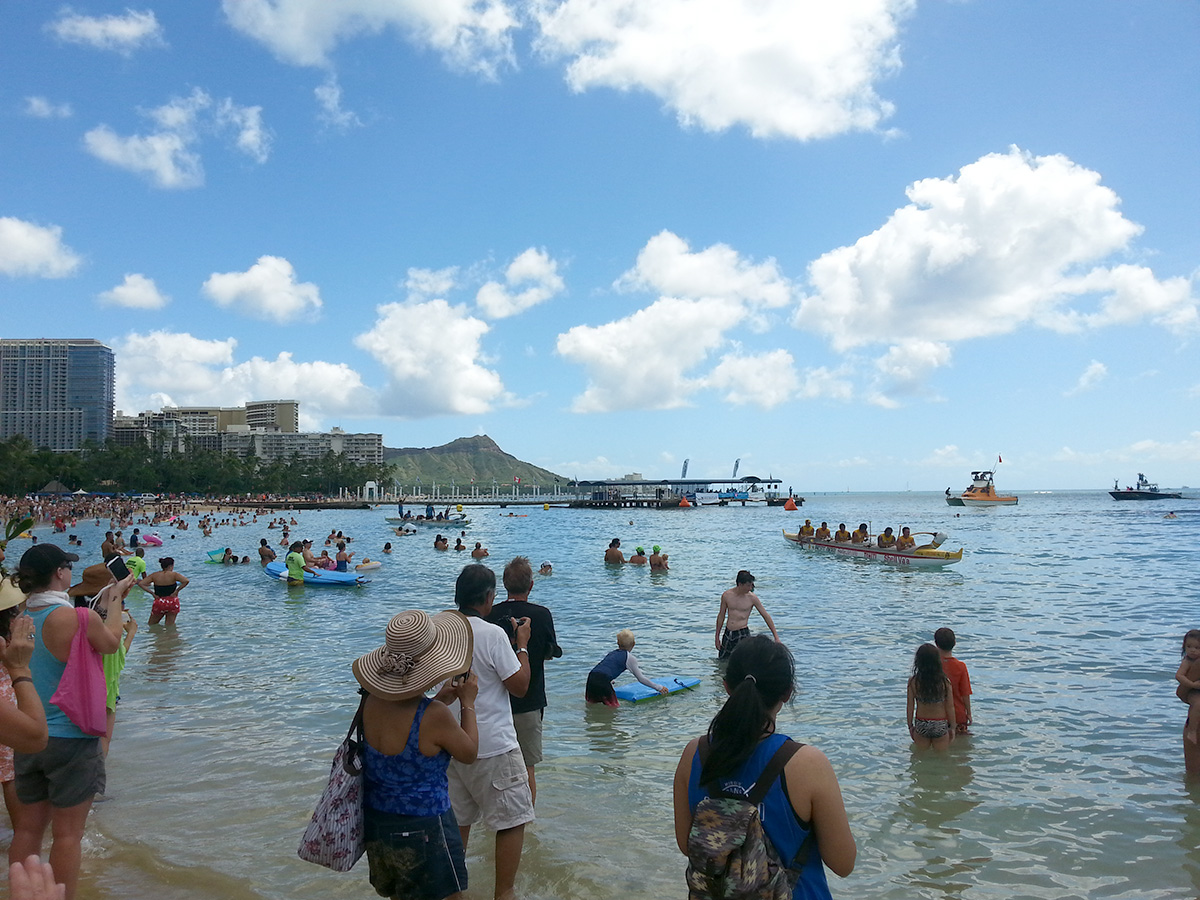