As the historic worldwide journey of the traditional Polynesian voyaging canoe Hōkūle‘a and its dedicated crew culminates on Saturday, June 17, the experience aimed at creating a “lei of hope” around the globe is actually just beginning.

What: Hōkūle‘a’ Homecoming
When: Saturday, June 17, 2017
Where: Kālia, O‘ahu (Magic Island)
Web: www.hokulea.com
Schedule:
7 a.m.: Voyaging canoes from the community and the Pacific arrive at Magic Island marina
10:30 a.m.: Formal homecoming ceremony for Hōkūle‘a and its crew
12:30 p.m.: Screening of Mālama Honua Voyage highlights
1 p.m.: Ho‘olaule‘a community celebration featuring live music as well as food and beverage for sale from local vendors
5:20 p.m.: Message of mahalo from Nainoa Thompson followed by the signing of “Hawai‘i Aloha”
5:30 p.m.: Homecoming celebration at SALT at Our Kaka‘ako featuring a marketplace along with food, drinks and three stages of entertainment
Parking: Public transportation and utilizing off-site parking is encouraged to alleviate congestion around Magic Island as parking at the public recreation area is not allowed, except for limited handicapped parking. Other options include free parking at McKinley High School from 7 a.m. to 6:30 p.m. with shuttles to and from Magic Island, and paid parking is also available at the Hawai‘i Convention Center.

More than four decades since being founded in 1973, The Polynesian Voyaging Society continues to build on a legacy of Pacific Ocean exploration, seeking to perpetuate the art and science of traditional Polynesian wayfinding and the spirit of exploration. Those involved with and affected by the epic global trek covering more than 50,000 miles via 28 countries and more than 100 ports, were taught via PVS' educational programs. These programs inspired students and their communities to respect and care for themselves, one another and their natural and cultural environments. 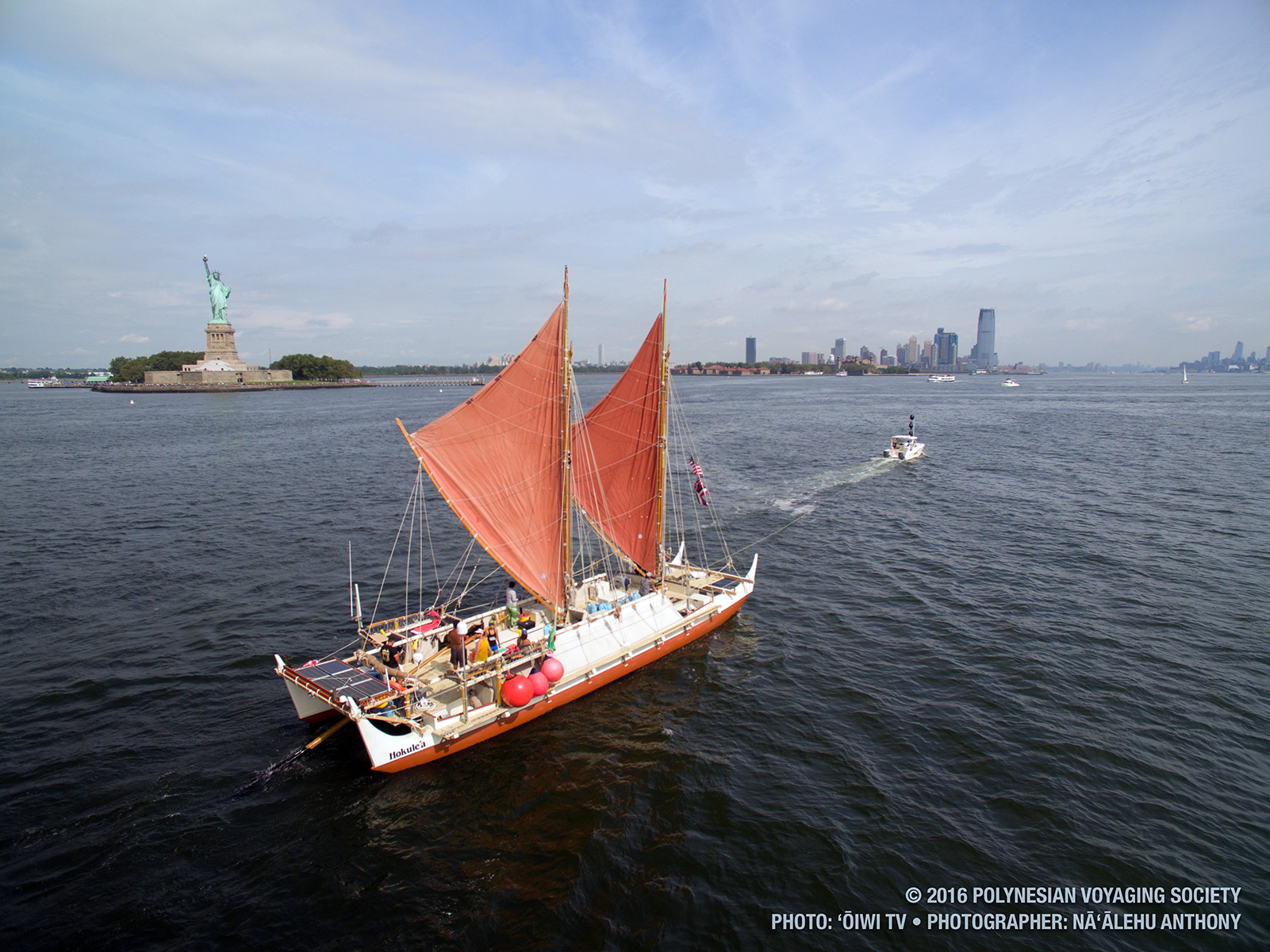 Above: In the summer of 2016, Hōkūle‘a made its way through New York Harbor fronting the iconic skyline as part of the Mālama Honua Worldwide Voyage. Photo: Naalehu Anthony

The native Hawaiian name for this journey of epic proportions is Mālama Honua, which means “to care for our Island Earth.” The Mālama Honua Worldwide Voyage, sponsored by Hawaiian Airlines, involved 200-plus crewmembers who have sailed Hōkūle‘a and its sister canoe Hikianalia (both named for guiding stars crucial to celestial navigation without the use of modern technology) engaging communities and sharing the Polynesian wayfinding culture with the goal of creating global relationships and inspiring action to care for “Island” Earth.

While crewmembers handle the arduous task of keeping Hōkūle‘a on course, Hawaiian Airlines helped the voyaging canoe remain on track from a logistical perspective. Over the last three years, Hawaiian Airlines provided transportation of crew and cargo throughout the expansive route network. 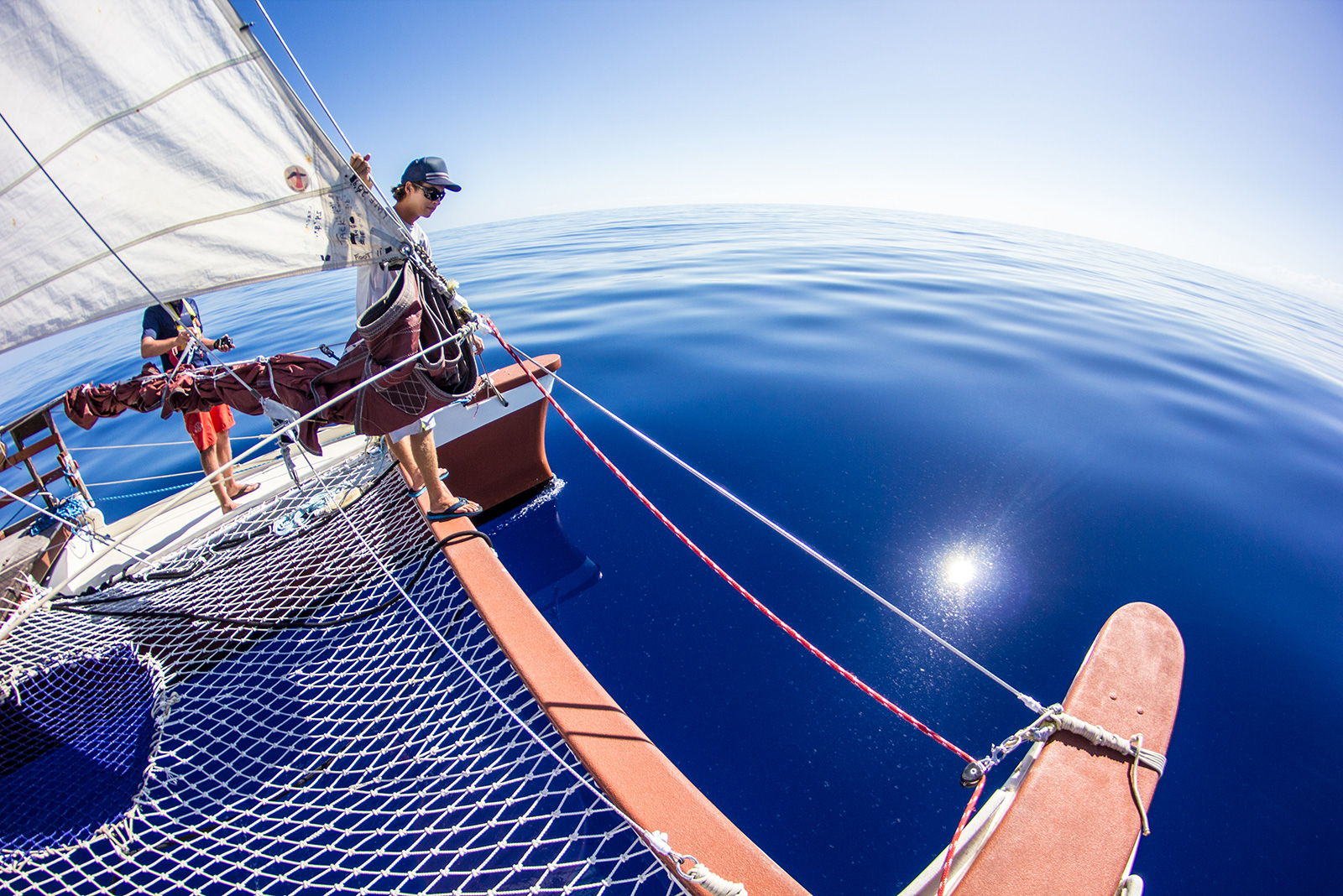 Above: Crew members aboard the Hōkūle‘a and sister canoe Hikianalia have become adept at dealing with a vast array of ocean and weather conditions, encountering from calm seas to rain and wind storms. Photo: Polynesian Voyaging Society

“This was an enormous logistic effort on the part of employees throughout our company who had to be very nimble,” says Hawaiian Airlines’ Senior Vice President of Corporate Communications and Public Affairs Ann Botticelli. “Crew schedules depended on weather and often changed at the last minute — and meant that some crewmembers who were planning to sail could not. Our teams here were extraordinary in making sure we could accommodate those who needed to travel, and their schedules.”

Hawaiian Airlines has been a sponsor of PVS since the organization started its mission decades ago. The airline initially committed 32 million miles to assist with Mālama Honua transportation, and that figure was increased as the voyage progressed.

“Our company feels very much a part of this epic adventure,” Botticelli says. “The Mālama Honua Worldwide Voyage has helped us all understand how people around the world are protecting natural resources, so the voyage has been completed at a critical point in the future of our planet. We look forward to the conversations that occur around our state over the next year as Hōkūle‘a visits communities throughout the islands.”

See the accompanying sidebar for more information about the monumental homecoming at Magic Island that will feature everything from a ceremony to music, food and community engagement. 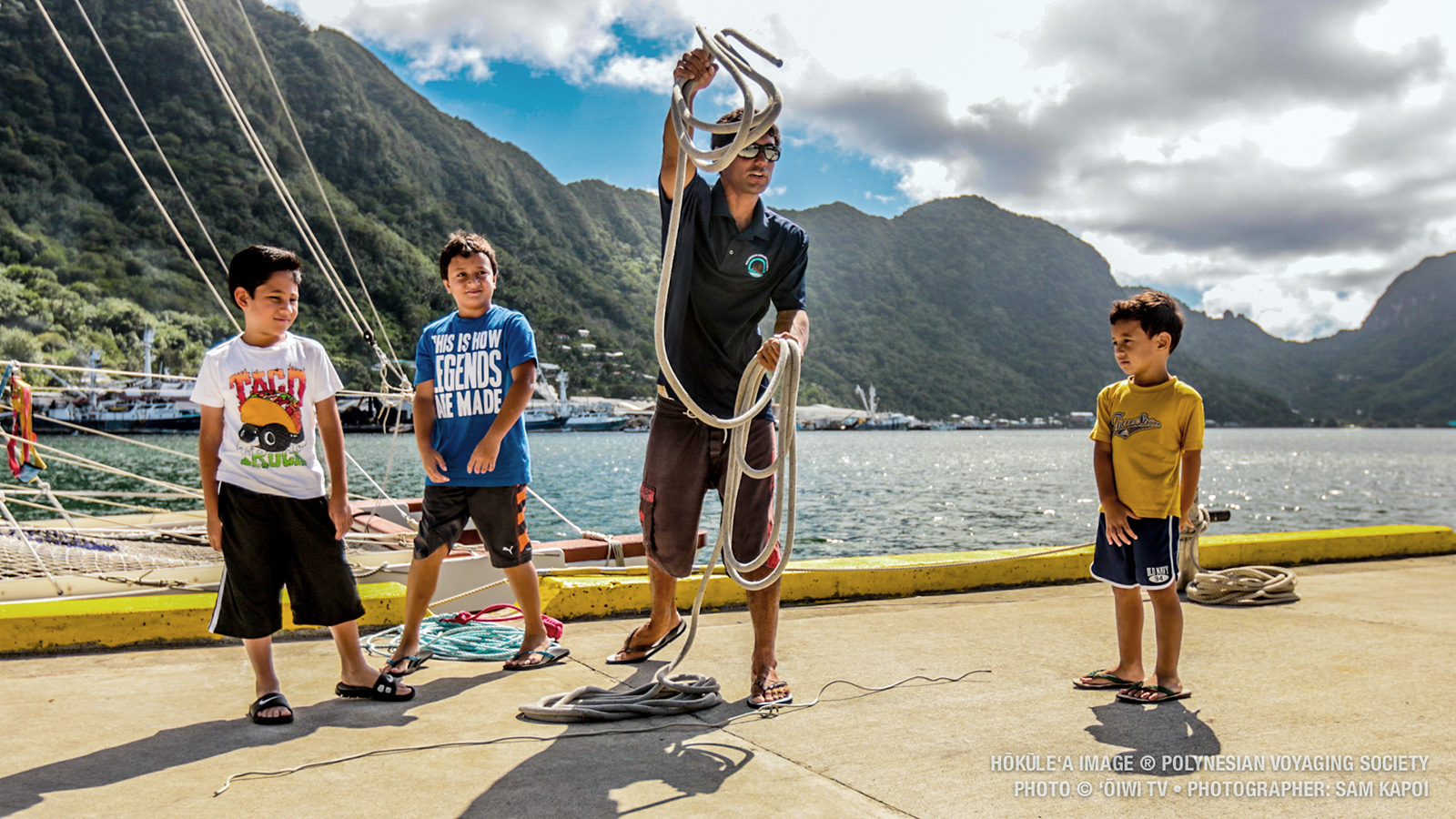 Above: As Hōkūle‘a and sister canoe Hikianalia dock in ports of call around the world, crew members engage with interested youngsters with the goal of spreading knowledge about the ancient practice of celestial navigation. Photo: Naalehu Anthony

Voyaging Traditions Live on Through Nainoa Thompson
On a clear morning just weeks before Hōkūle‘a’s return to Hawai‘i, Nainoa Thompson is anxiously awaiting the voyaging canoe’s return while also focusing on necessary plans that need to be finalized prior to the historic homecoming.

For Thompson, a pwo (master) navigator and president of PVS, Hōkūle‘a’s return to the islands carries the same significance as a family member coming back from a long trip; the double-hulled canoe, its lashings, sails and equipment represent the limbs, bones and heart of the vessel that is essentially a revered ancestor. Thompson has dedicated his life to the deeper meaning of “voyaging,” which can be traced back thousands of years when Polynesians trekked through the Pacific Ocean. As a youngster, Thompson was immersed in hands-on education about the environment on land, across and beneath the ocean and in the sky above. 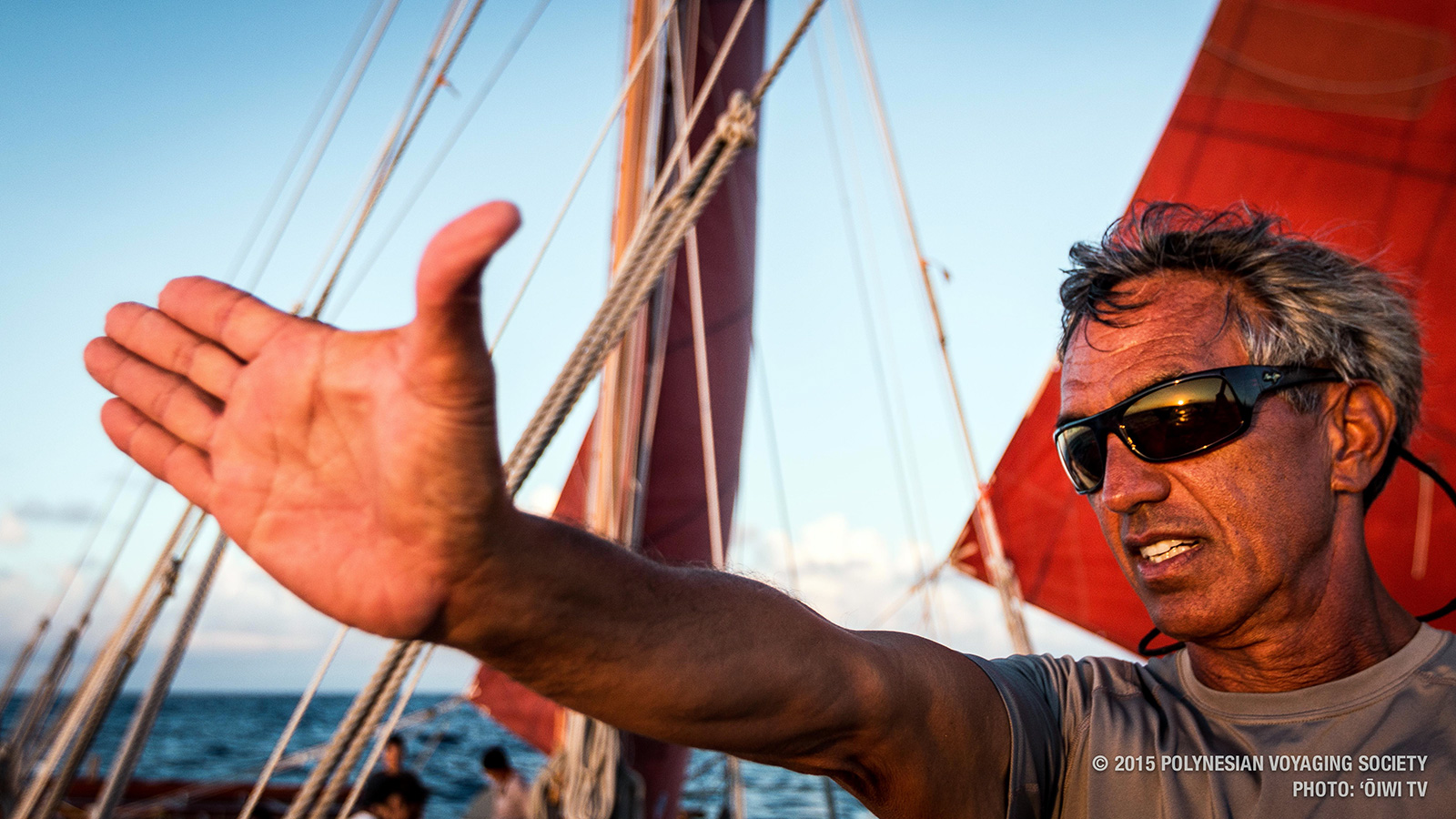 Above: Master Navigator Nainoa Thompson has dedicated most of his life and career to perpetuating the culture of Polynesian voyaging and teaching the next generation of wayfinders. Photo: Kaipo Kiaha

Nainoa’s father Myron “Pinky” Thompson helped guide the PVS as a community leader and imparted a passion for the universal values of voyaging: having a vision of islands rising from the sea, of self-discipline, preparation, courage, risk-taking and the Aloha Spirit that bind a crew on an arduous journey.

Nainoa Thompson would go on to learn the nuances of navigating vast expanses of open ocean after pwo navigator Mau Piailug taught him to realize the natural cues necessary to guide Hōkūle‘a, and to care for the world and its precious resources.

“You’re not going to take care of what you don’t understand, and you can’t understand until you learn,” Thompson says.

Throughout the monumental voyage, crewmembers sailed Hōkūle‘a across the world’s oceans without modern navigational tools. Instead, they rely primarily on celestial navigation and traditional wayfinding techniques. Via its mission to bring attention to the critical need to protect the earth’s natural resources, one of the goals for Hōkūleʻa and the crew is to connect cultures and communities, share island wisdom and bring to light environmental and indigenous stories of hope.

Thompson explains that by perpetuating “the Polynesian tradition of outrigger canoe paddling, we hope to share how Hōkūle‘a represents the common desire shared by people of Hawai‘i and around the world to protect our most cherished values and places from disappearing.”

One of Thompson’s daily routines that he engages in along with his family at their estate near O‘ahu’s southeast coastline involves feeding, caring for and encouraging a fledgling Manu-O-Kū (white fairy tern, and the official bird of Honolulu). These small birds are adept at fishing to survive, and as a key byproduct, serve as flying compasses for Polynesian voyagers. Thompson explains that wayfarers can often struggle to find small islands amid thousands of miles of ocean, especially when targeting atolls that barely elevate above sea level. The master navigator notes that by locating Moku-O-Kū as they fetch fish at sea during the day, navigators can then follow the birds back to land as they return for the evening. 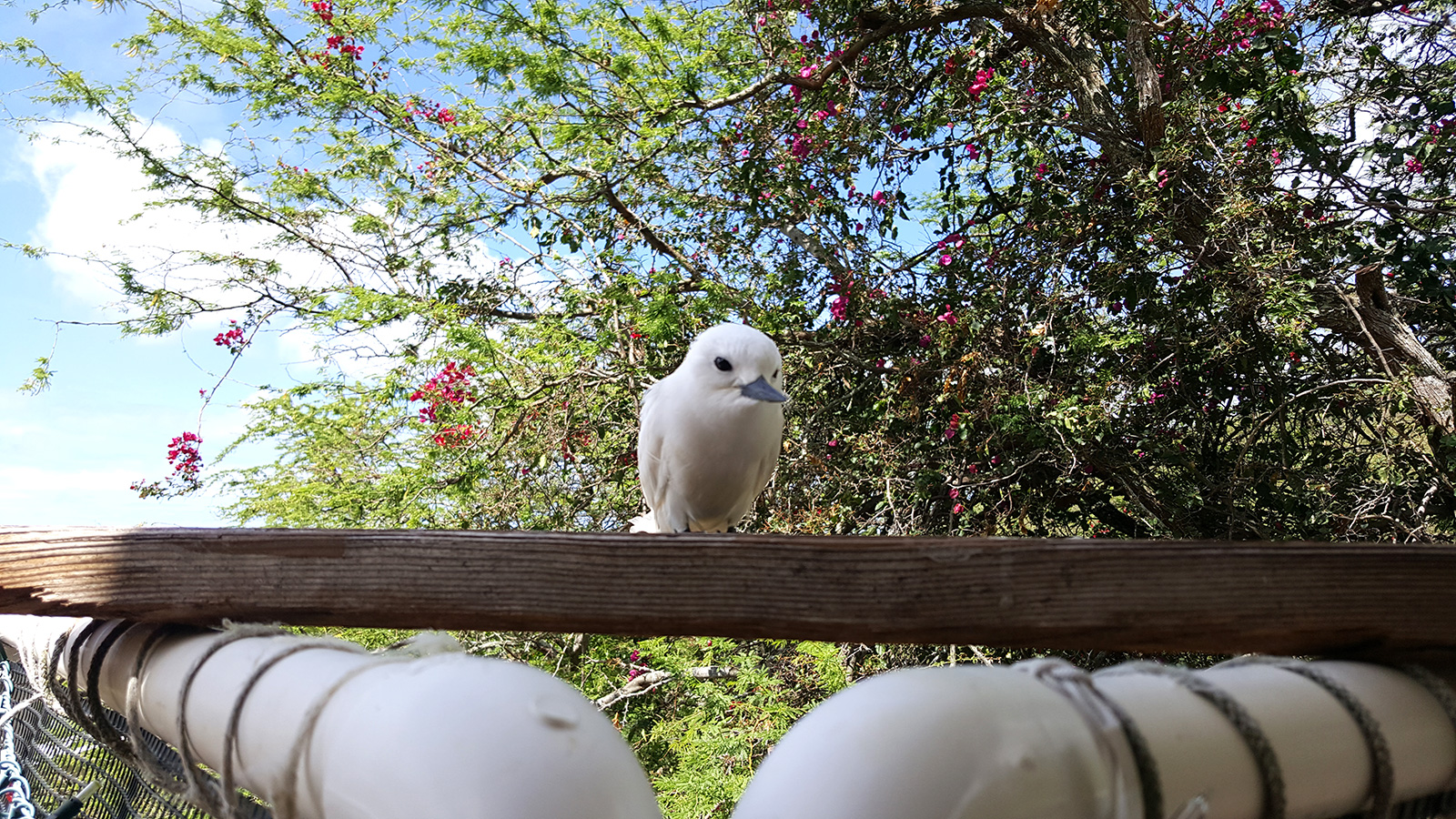 Above: This fledgling Manu-O-Kū (white fairy tern, and the official bird of Honolulu) has been nursed back to health by Master Navigator Nainoa Thompson and his family after it was orphaned. These small birds fetch fish at sea during the day, and navigators can then follow them back to land as they return for the evening. Photo: Kyle Galdeira

This particular Manu-O-Kū was abandoned by its parents and has been nurtured by the Thompson family to the point that it is nearly ready to fly out on its own and find a family of birds to join. Appropriately, as the bright white bird ventures out to begin its own voyage of self-discovery and fulfillment, Hōkūle‘a will return to Hawai‘i as a symbol of the Polynesian voyaging culture’s perpetuation across multiple generations of learners.

Prepare for Hōkūle‘a’s Homecoming and Join in the Celebration
One of the aspects of the large-scale homecoming event that makes the experience so special is the ability for community participation via songs that honor and celebrate the efforts of Mālama Honua.

After three successful years of sharing the concept of caring for Island Earth, it’s time to celebrate Hōkūle‘a’s return on June 17 at Kālia, O‘ahu (Magic Island). As part of the celebration that is expected to draw upwards of 50,000 people, four mele (songs) are being taught so onlookers can join in and sing as one.

Kanaeokana, a recently formed network of Native Hawaiian schools and organizations, is helping to teach the mele with the goal of the crowd using a unified, bold voice to honor the achievements of Hōkūle‘a and its crew.

Log on to Kanaeokana.net/HokuleaHomecoming to hear the mele and see the full compilation of lyrics. For more information about PVS and the Worldwide Voyage — including a host of photos, videos and stories — visit hokulea.com.