Hawaii is recognized by many for its eight major islands that make up an iconic chain in the middle of the Pacific Ocean.

The extensive swath of the Hawaiian Islands actually extends approximately 1,500 miles south-to-north from Hawaii Island to Kure Atoll. The archipelago is composed of 137 islands altogether, including smaller islands, atolls, reef formations and seamounts that are home to some of the area’s native fish, animal and plant species.

On the windward (East facing) shore of Oahu, both kama‘aina (locals) and malihini (visitors) alike have come to appreciate the beauty and important functions of a handful of offshore islets situated within visibility – and a brief watercraft ride away – from the beach. 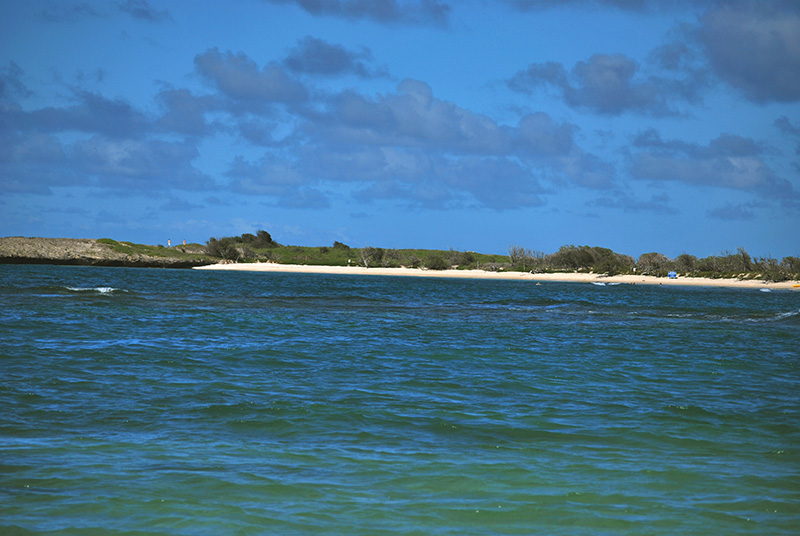 There are no goats on Mokuauia, but the saddle-shaped island covering approximately 13 acres in Lā‘ie Bay known as Goat Island used to serve as a grazing spot for local residents to take their hungry animals. And, Native Hawaiian mo‘olelo (stories or legends) explain that Mokuauia and four other islands, including Puka Island with its noticeable hole in the middle, near Lā‘ie Point were formed when demigods Niheu and Kana killed a great lizard, and threw the resulting pieces into the ocean.

Located within swimming distance roughly a half mile off shore from Malaekahana Beach, Mokuauia serves as a protected sanctuary for shearwaters – seabirds that nest in burrowed-out nests in the soft, sandy surface. When visiting Goat Island, remain along the perimeter trail to avoid damaging or killing adult or fledgling birds in their intricate network of nesting tunnels. In addition to the picturesque scenery, visitors can hunt for shells, search for marine life and enjoy the protected lagoon area to the island’s left side (when looking at it from shore). 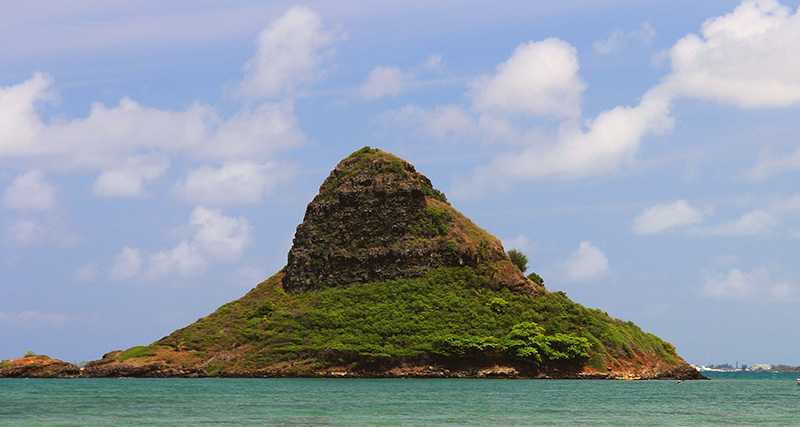 While it is named after the conical hat typically worn by Asian farmers in the fields centuries ago, its Hawaiian name means “little lizard.” Legend has it that the island marks the remains of a giant lizard, or dragon’s tail that was chopped off and discarded in the ocean by goddess Hi‘iaka, the sister of Pele – the Hawaiian goddess of fire.

Mokoli‘i, which fronts Kualoa Beach Park and the adjacent Kualoa Ranch, is owned by the City and County of Honolulu and is protected under both state and federal park regulations while being open to the public from dusk until dawn. The island can be accessed by kayak, boat, surfboard or stand-up paddle board, or by swimming (or even wading during low tide) across the one-third mile of ocean from shore. 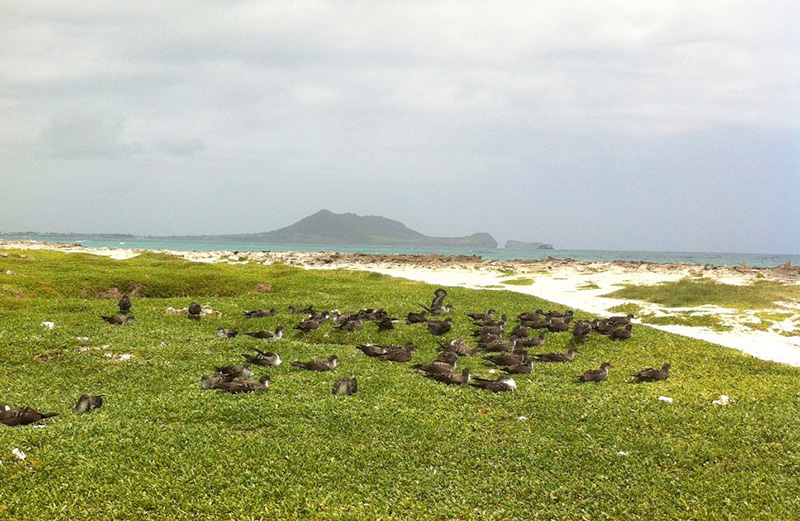 In Hawaiian, Popoi‘a means “rotten fish,” but don’t let the name fool you as Flat Island provides plentiful pleasant experiences for those looking to venture about a quarter mile from the boat ramp at Kailua Beach Park.

The island’s traditional name most likely refers to the smell generated by offerings left at what used to be a fishing shrine in the middle of the island, which was subsequently destroyed by a tsunami in 1946. Flat Island is part of the Hawai‘i State Seabird Sanctuary, so visitors are advised to stay along the coastline in order to avoid disturbing birds as they nest.

Flat Island offers a few small sandy beaches in coves protected from the oncoming waves by the island itself. A popular surf break can be enjoyed along the island’s southeast edge, but take caution as a wipeout can lead to an unwanted meeting with the coral reef or the island’s jagged cliffs. 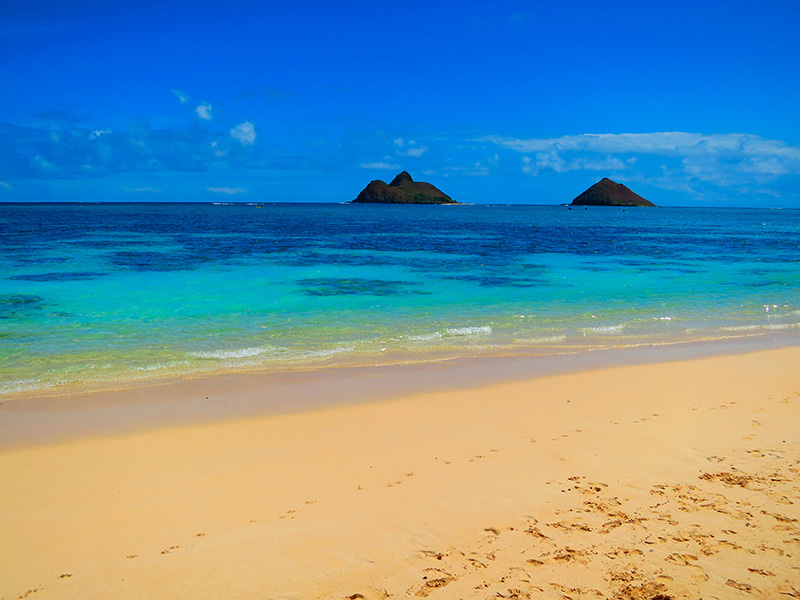 Nā Mokulua in Hawaiian means “two islands,” and perfectly describes the duo of iconic islets that reside three quarters of a mile off the white sandy beach of Lanikai.

The individual islands are named Moku Nui (the larger one with two humps on the left when looking from shore) and Moku Iki (totally off limits to people), which are part of the Hawaii State Seabird Sanctuary. The “twin islands” serve as one of the most photographed and recognized landmarks in Hawai‘i, and were formed roughly three million years ago as part of the large Ko‘olau shield volcano.

Most visitors venture out to the islands on kayaks or boats, but it is possible to make the trek by swimming as long as you are experienced and the ocean conditions aren’t too rough. Landing and walking/exploring is limited to Moku Nui, and keep an eye out for protected marine life and coral formations. 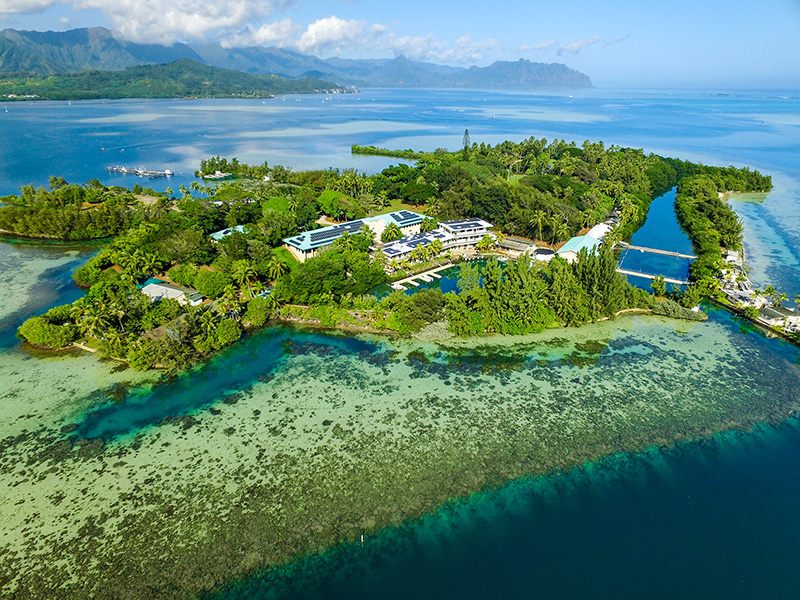 Just sit right back and you’ll hear a tale…

Coconut Island was featured in the classic television program Gilligan’s Island, and while some wanted to turn the 28-acre site into a resort and exclusive club, it has since been converted to serve educational needs. The coral reef bed is named Moku o Lo‘e in Hawaiian, which refers to the island’s shape resembling the curve of a fish hook.

After multiple landowners enjoyed the island as a residence, rest and relaxation station for troops during World War II, and a hotel, Coconut Island was eventually purchased by the state. The island is now home to the Hawaii Institute of Marine Biology, and as a part of the University of Hawaii network of programs, it serves as the only U.S. laboratory built on a coral reef.

Oahu’s offshore islets are state wildlife sanctuaries and many are off-limits to visitors. For detailed information on rules and safety precautions specific to these islands, please visit the Hawaii State Department of Land and Natural Resources website here.