Above: A freshly-washed Polaris UTV gets ready for a dusty, sometimes muddy adventure through Ironwood forests, former pineapple fields and near traditional Hawaiian sites.

Lanai is the smallest inhabited Hawaii island—that the public can freely visit—giving it a charming small town vibe where life is unhurried, traffic-free and friendly. There are actually more axis deer that call Lanai home than the approximate 3,100 people! And unlike the other Hawaiian Islands, Lanai is privately owned. Oracle co-founder Larry Ellison owns 98 percent of the island, which he purchased in 2012 from American philanthropist David Murdock.

Above: Twists and turns on red dirt roads make for an exhilarating adventure, stopping at interesting spots along the way.


The 90,000-acre island has only three paved roads, and no traffic lights. But that doesn’t mean there’s little to do. There are roughly 300 to 400 miles of winding, dirt roads on the island. It’s paradise for nature lovers with a sense of adventure. Many of these roads were created during Lanai’s pineapple era. From the 1920s until 1992, about 22 percent of the island grew the sweet fruit, hence it’s nickname the Pineapple Island.

All that’s needed to head off the beaten path is a 4x4 vehicle or an ATV. It’s the perfect, and really the only way, to explore the island’s natural beauty and visit its best-kept sites, such as Keahiakawelo, Shipwreck Beach and the Kaunolu fishing village. 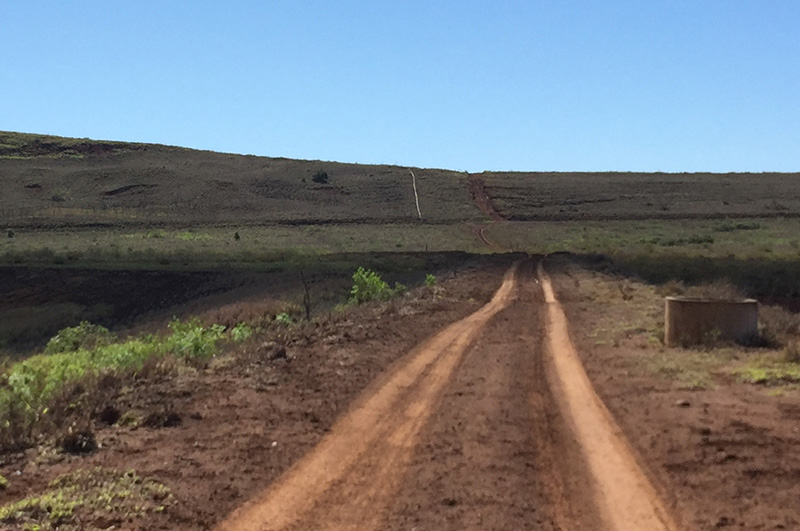 Above: There are approximately 300 to 400 miles of winding, dirt roads on Lanai and many of them weave through former pineapple fields.


There are two ways to bounce along Lanai’s rutted dirt roads: Rent your own Jeep Wrangler or ATV, or book a guided tour. (Keep in mind that off-roading requires a higher driving level than some may be used to and many of these roads are not very Google maps friendly.)

I decided to go along for the ride and let a professional do the driving. You can book off-road tours at the Four Seasons Lanai, a luxury resort tucked above the picturesque Manele Bay on the south shore of the island. It offers outdoor experiences, including horseback riding, archery, clay shooting and UTV—ultra terrain vehicles—tours. 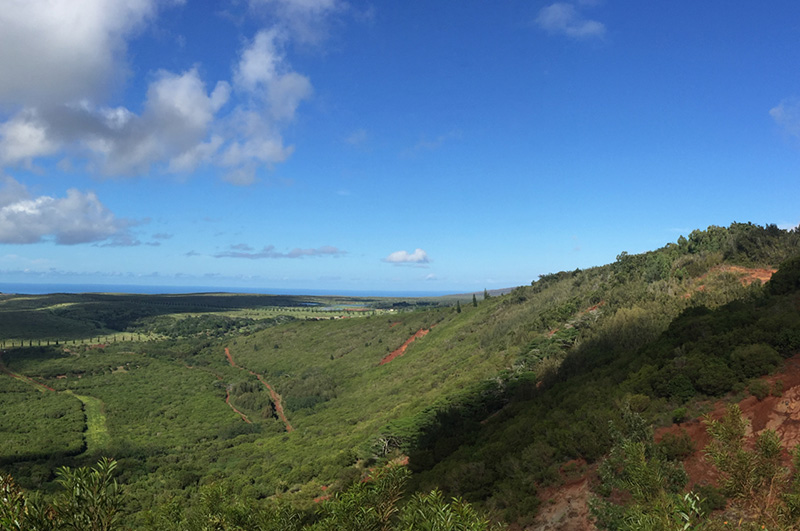 Above: With stunning landscapes and scenic vistas, the Munro Trail offers forest, canyon and ocean views all in one place.


My tour starts at 9 a.m. on a cool, sunny morning. Two Polaris UTVs, gleaming in the sun. They have just been washed, but that won’t last long on these dusty, sometimes muddy red dirt trails. For the gearheads: These guys can go up to 70 miles-per-hour, have 82 horsepower and can seat four.

We don helmets and goggles and pile into the UTVs. My tour guide is Jessie, who has lived on the island her entire life. She’s been a guide for about a year. Our two-hour tour will head east, weaving through the Palawai basin in Ironwood forests, past former pineapple fields, near traditional Hawaiian sites and up Puu Alii mountain. 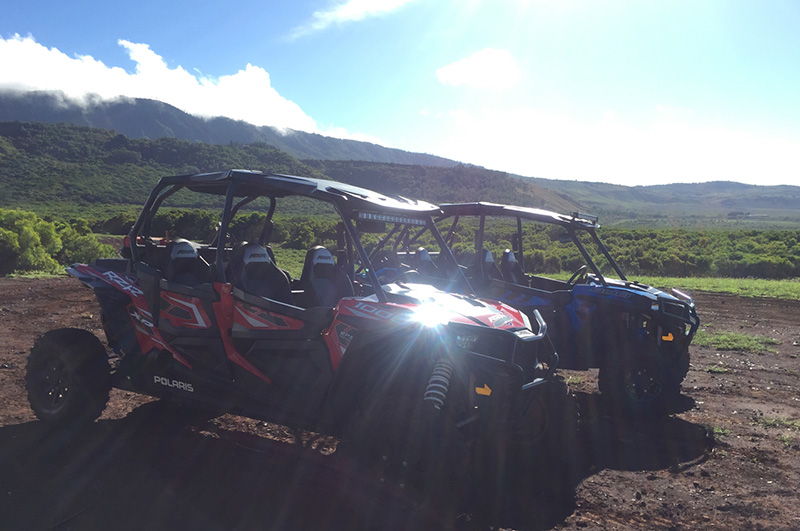 Above: If you don't want to drive, a UTV (ultra terrain vehicle) tour allows you to ride along and let your tour guide do the driving.


We speed off. I start off in the front seat and even though I’m not driving, the ride is exhilarating. Jessie nimbly takes each twist and turn of the grooved roads. She makes stops at places of interest along the way. I learn about the island’s flora, both native and introduced species, including the indigenous hala plant and milo tree and the invasive ironwoods and paperbark eucalyptus. The island is also home to axis deer and wild turkeys, both of which were also introduced.

Jessie pulls over to the left and points out a patch of kalo. The plant is significant in Hawaiian culture and remains an important staple. The dry land terrace has been restored and is adjacent to a preserved agricultural heiau, or Hawaiian temple. 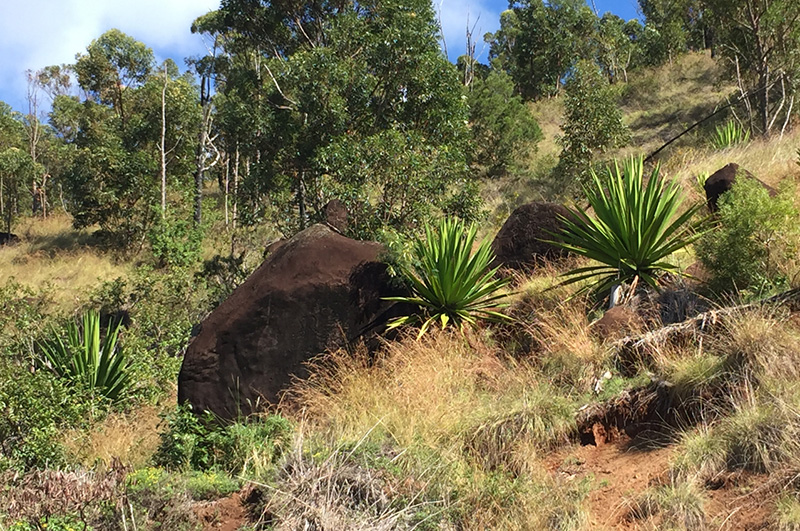 Above: With hundreds of ancient stone carvings, the Luahiwa petroglyphs is one of the most culturally significant sites on the island of Lanai.


At a lookout near the beginning of the Munro Trail we get out of the UTV to take even more photos. The vista boasts sweeping views of the east side of the island verdant intersected with thin red roads. Now populated with thick forests, at one time the land produced 75 percent of the world’s pineapple supply.

My favorite site on the tour is the Luahiwa petroglyphs. It’s one of the most culturally significant sites on the island. There are hundreds of stone carvings of men, dogs, turtles, canoes and more, etched into boulders along the slope. The petroglyphs were made hundreds of years ago before Western contact. I’ve never seen petroglyphs in person, so I get out for a closer look. There are a couple of rocks relatively close to the dirt road. The carvings are hard to make out on the dark red-dirt dusted rocks, but if you focus, you can still see them. 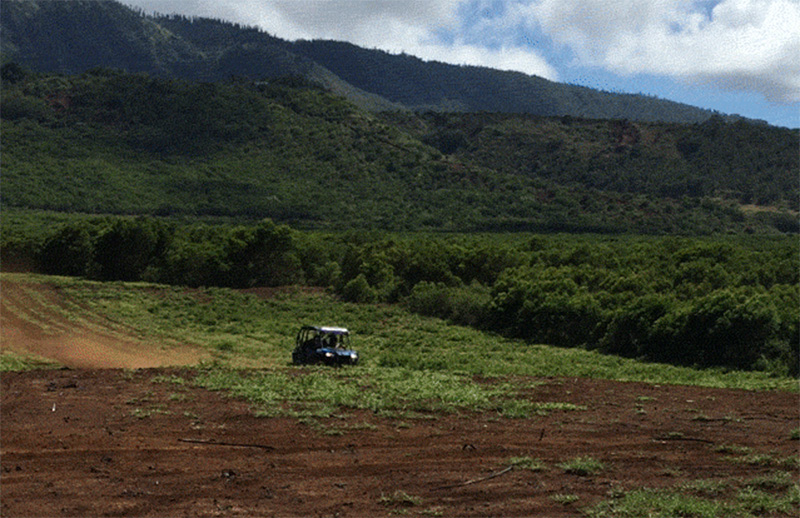 Above: Exploring the island in a 4x4 vehicle may be the perfect way to explore Lanai’s natural beauty and visit it best-kept sites.


We zoom off at a fast 50 mph to our last stop of the tour, climbing our way up to about 1,800 feet in elevation. We’re at the Naha Trail Overlook, on the southeast side of Lanai. It provides one of the best viewpoints of the island. From here you can see Kahoolawe, Maui and Hawaii Island, all without barely turning your head.

The drive back takes some of the same roads we used to get there. Jessie floors it, sometimes going 60 mph. We even catch some air a couple times. The trip back is just fun. 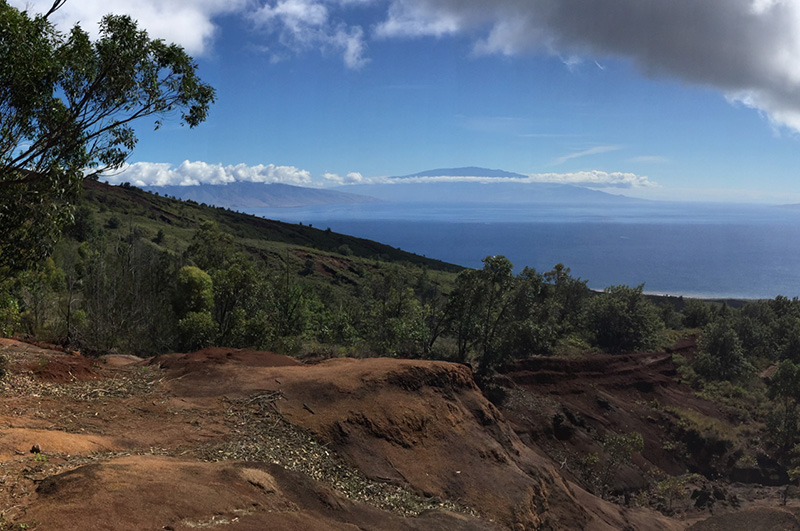 Above: The Naha Trail, a route once used by King Kamehameha and his troops, boasts breathtaking views of the West Maui Mountains and Haleakala.

Where to Rent Off-Road Vechicles:

If you want to explore Lanai on your own without a guided tour, rent your own 4x4