Above: Animal encounters are fun family-friendly experiences, especially for city folk who want to reconnect with nature.

Did you know flamingos turn pink from the tiny shrimp that they eat? Or that pigs really aren't that dirty? Have you ever wondered why cats are always on the prowl at night? Here are some interesting animal facts that may surprise you.

Animals are like rainbows, presents, ice cream and favorite songs: They always make you feel good. Whether you’re cuddling up with a kitten, chasing a playful puppy or enjoying a trail ride on horseback, animals are fun playmates, soothing companions and loyal friends.

Here are eight ways you can make memorable connections with them in Hawaii.

Meet more than 100 furry, scaly and feathered friends in a pastoral setting filled with native, edible and medicinal plants. On a visit, you can scratch goats’ backs, rub piglets’ bellies and perhaps bottle-feed an orphaned lamb. Or, join a Yoga on the Farm class on Saturdays. True to its mission of education, KAEC offers volunteer workdays once a month and enrichment programs for children during school breaks. Teachers can Rent a Pet for their classroom and/or invite KAEC’s Pet Professor to come and talk about animal care and behaviors. The star of the presentation is her companion; options include a rabbit, turtle or duckling. 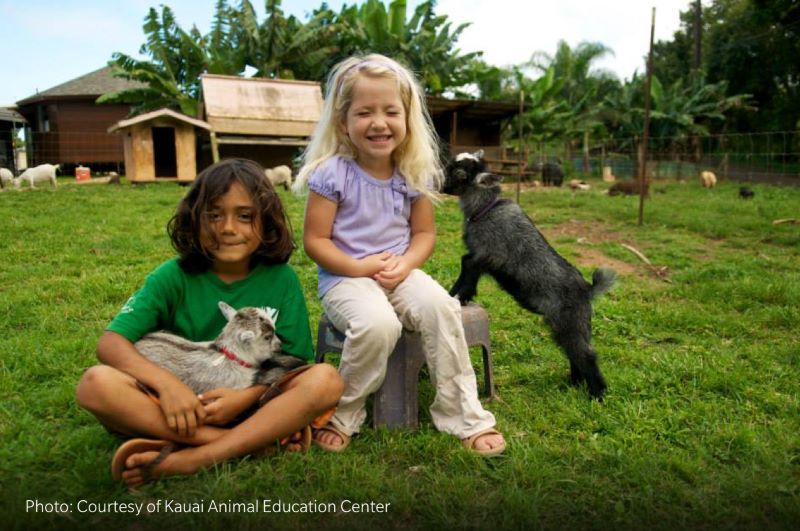 Above: Designed for animal lovers, kids and adults of any age will feel confident interacting with rescued farm animals at KAEC.

This zoo within Honolulu Zoo is especially designed for kids. Among the animals greeting them in a barnyard setting are donkeys, cows, chickens, turkeys, tortoises, sheep, goats, even a skunk. Throughout the day, staffers bring out small animals for up-close educational encounters with visitors, and fascinating facts about others (the Sumatran tiger, Japanese salamander and African wild dog, for instance) are shared via videos on interactive touch-screen monitors. Honolulu Zoo also offers twilight tours, sleepovers and daytime camps that keep keiki (children) busy with crafts, games and hands-on lessons all revolving around animals, of course. 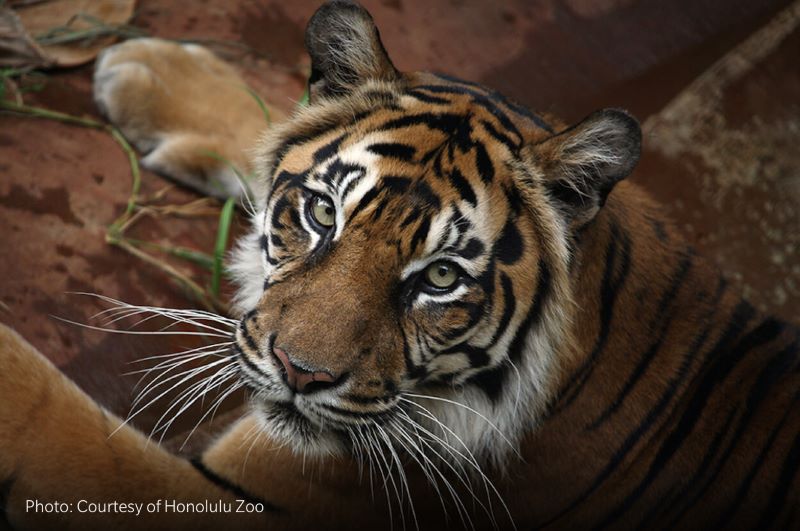 Above: What's new at the Honolulu Zoo? There's always something exciting going on so come by for a visit.

It’s not a mistake: The name of this family-owned-and-operated “petting farm” is Lawrence Lovestock, not Livestock. The Lawrence ohana (family) says the latter refers to animals that feed bodies; in contrast, their animals feed souls. The verdant 10-acre property at the foot of the Koolau Mountains has been in their family for six generations — over a century — and they’re happy to introduce visitors to the menagerie that also calls it home. On a guided tour, you can dole out kisses, pets, hugs and snacks to goats, lambs, rabbits, chickens, parrots, pot-bellied pigs and other adorable “lovestock.”

Above: Pua'a is the Hawaiian name for pig. At Lawrence Lovestock, you'll see how smart and friendly these cute, lovable creatures truly are.

Residents of Three Ring Ranch, the only accredited animal sanctuary in Hawaii, include bison, alpacas, macaques, chinchillas, io (Hawaiian hawk), pueo (Hawaiian owl) and nene (Hawaiian goose, Hawaii’s state bird). The sanctuary offers private educational tours, in-class instruction and field trips for schoolchildren, internships for veterinary and pre-vet students, and residential volunteer programs for those 18 and older. All visits must be prearranged; there are no regular public hours, and drop-ins can’t be accommodated. One of the surprising takeaways: Some of the common ways people approach animals are actually perceived as threats. 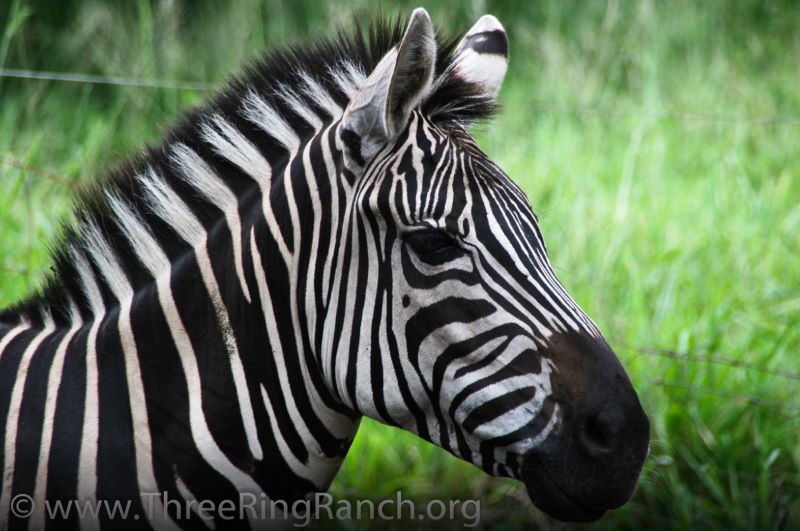 Above: The Three Ring Ranch is home to zebras, nene, hawks, owls, flamingos and reptiles, as well as many other rare, endangered and exotic species.

Billy will follow you all around; he’s a curious goat who doesn’t want to miss any action. Pablo the peacock loves attention and knows how to get it; he struts about with his tail feathers spread out like a gorgeous fan. Pua the pig usually hangs out by the feeding bowls and will steal her neighbors’ food if they’re not vigilant. Laugh at more animal antics as you catch tadpoles in the pond; enjoy a private petting zoo experience; feed chickens, ducks, miniature horses and miniature cows; and hunt for candy-filled eggs even when it’s not Easter. 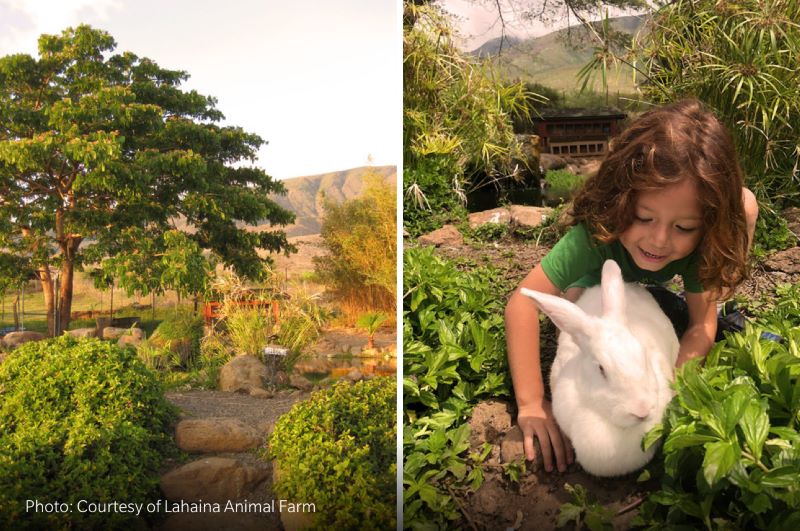 Above: Spend the morning getting to know the farm animals at this unique petting zoo and learn about each animal's special story.

If there were a heaven on Earth for animals, this would be it. Ponds, tree-shaded pastures and gardens of ornamentals and food plants create a beautiful haven for some 350 gentle creatures that had been abused, abandoned or orphaned. They live out their lives here in peace, harmony and, as the owner likes to say, “pure love.” Hug a deer, cuddle a chicken and brush a goat during programs for visitors, school groups, kupuna (elders) and at-risk and special-needs children. Animals provide unconditional love and, even without speaking, share life-changing lessons about trust, empathy, kindness and forgiveness.

Above: Cuddle a chicken, feed bunnies and guinea pigs, frolic with goats and lose yourself in the soulful brown eyes of a cow at Leilani Farm Sanctuary.

Ameraucanas lay eggs with blue shells. Silkies are named for their fluffy, soft-as-silk plumage. Flaunting stripes from head to feet, Barred Cochins are also standouts in the coop. You’ll see all of those unique chickens, plus perhaps bathe a pig, hold a bunny, watch a tortoise race and groom a miniature horse. Visits conclude with a story such as Barnyard Dance whose rhythmic words inspire everyone to clap their hands and stomp their feet as the zany characters bow, prance and twirl. Kids leave with big smiles on their faces and their choice of farm-themed stickers.

Above: Enjoy a heartwarming experience with animals that will bring smiles and laughter to both keiki (children) and their parents at Maui Animal Farm.